Daniel Negreanu isn’t messing around this summer. He even watched the Sylvester Stallone come-from-behind movie classic Rocky a few days ago for motivation after busting out of a tournament. A determined Kid Poker is focused on putting an end to his four-year bracelet-less drought. 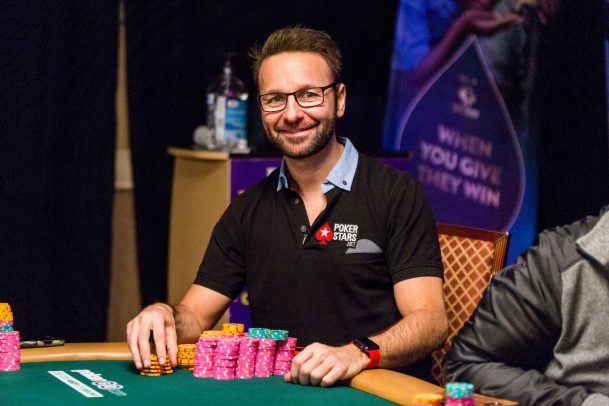 And now, the world’s all-time tournament money list leader has a commanding chip lead heading into the third and final day in Event #30, the $10,000 H.O.R.S.E Championship.

Negreanu, a six-time WSOP champion, is one of 15 runners left hoping to win the $383,208 1st place prize and one of the most coveted bracelets each summer. The $10,000 H.O.R.S.E. tournament is to poker the same way the Master’s is to golf. Both are, as CBS announcer Jim Nantz likes to say, “a tradition unlike any other.”

H.O.R.S.E. forces competitors to master five variations of poker. Thus far, Negreanu has mastered the games better than anyone else. He will enter Day Three on Saturday with 1,213,000 chips, a huge advantage over 2nd place stack-holder Scott Bohlman (756,000).

Victory is certainly no guarantee, especially when the competition includes 2016 WSOP Player of the Year Jason Mercier (541,000), former November Niner Jerry Wong (457,000), and one of the best high-stakes players in the world, Brian Rast (553,000).

Saturday was scheduled to be the final table, but as often happens in the World Series, that didn’t quite go according to plan and two tables remain. Word is that they will play down to a winner tonight, however, come hell or high water.

It seemed like Chris Moorman was dealt pocket aces every hand at the $3,000 WSOP No-Limit Hold’em 6-Handed final table. Okay, that’s a bit of an exaggeration. Once in a while, he had to settle for pocket kings or, heaven forbid, A-K.

All kidding aside, Moorman, the tournament’s champion and $498,682 winner, played a flawless game of poker on Friday and the deck cooperated nicely. He beat Bernardo Dias in an intense heads-up match. It was his first WSOP bracelet after 30 career cashes. He no longer has to shake the “one of the best to never win a bracelet” moniker.

Moorman had quite the entertaining rail at the final table. While consuming numerous adult beverages, his fans sang random songs after he won pots. They even busted out with a Christmas carol, which doesn’t make a heck of a lot of sense in June. Alcohol is a hell of a drug.

Face Off Between Moorman and Dias
His match against Dias was more entertaining than the drunks in the crowd, though. Moorman had a 6-1 chip advantage when heads-up play began. It appeared to be all over but the crying. But his opponent wasn’t going to go away without a fight. Did the New England Patriots laydown and quit after the Atlanta Falcons took a 28-3 lead in the Super Bowl? No, they came back and won the game. That didn’t happen for Dias, however, so maybe that wasn’t the best analogy.

The eventual runner-up quickly got it back to an 8-5 disadvantage, but then Moorman began chipping away at his stack, before finishing him off on the 132nd hand of the final table.

Don’t feel bad for Dias, though. He isn’t going back to Brazil empty-handed. He’ll take home $308,166, more than doubling his career tournament winnings.

Venezuela’s Joseph Di Rosa Rojas won a marathon on Friday. Not by running 26.2 miles, though. He won the kind where no athleticism is required and he didn’t even have to get up out of his chair (except for bathroom breaks).

Event #23, the $2,620 Marathon, a grueling five-day event, had 1,759 entries. Di Rosa Rojas was the last man standing, earning $690,469. How does one feel after winning their first WSOP bracelet and more cash than he’s ever seen at one time?

“I don’t know, maybe tomorrow I will know,” he said in his post-game interview.

He’s a mixed-game specialist, so this tournament was right up his alley. He has two cashes this summer already, both in triple-draw events.

Can Sabat Finally Win One?

Eddy Sabat is among the best tournament players to have never won a WSOP event. The Los Angeles-based pro has secured his 36th career Series cash and is the chip leader with 30 remaining in Event #29, the $2,500 No-Limit Hold’em as we head into Saturday’s play.

Sabat has more than $3 million in career live tournament winnings. Will today finally be his day to get over the hump and scoop a gold bracelet and another $456,822? Check back tomorrow here at CardsChat to find out.