Daniel Negreanu believes Chris Ferguson doesn’t give a “f**k” about the poker community, following a deafening wave of silence from the former Full Tilt board member. Ferguson, aka Jesus, was once a familiar figure at the World Series of Poker (WSOP), but following the demise of Full Tilt, he’s been notable by his absence. Until this year. 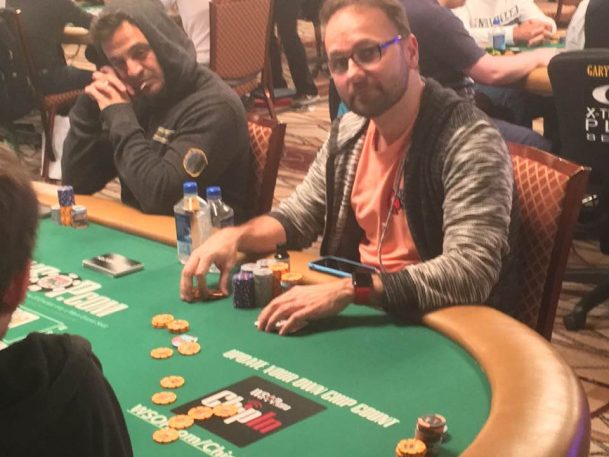 I’m tawkin’ to you: Daniel Negreanu (next to former Main Event champ Joe Hachem), seen here at the Rio over the weekend, has something he wants to say to Chris “Jesus” Ferguson about the latter’s refusal to apologize about Full Tilt. (Image: CardsChat.com exclusive)

Now, five years after Black Friday and the unraveling of Full Tilt, Ferguson has risen from the ashes like a phoenix and made himself at home in multiple WSOP events.

And much to the frustration of many who see his presence at the Series as a slap in the face, Ferguson has actually performed extremely well in the events he’s entered.

Despite his prior last live cash going back to 2010, Ferguson has made the money eight times so far this summer. He’s even managed a fourth place finish in Event #39, the $10K Six-Handed NL, where he took home $183,989.

Unfortunately, with each deep run he manages, Ferguson also appears to be digging himself a deeper hole. By refusing to respond to the media’s questions about his time at Full Tilt, Ferguson has irritated a number of players, including Negreanu.

Never one to hold his tongue when it comes to controversial matters, Negreanu recently told PokerNews that Ferguson’s lack of ownership about the situation is a slap in the face for players.

“This guy Chris, he just shows up and it’s like f**k you guys, I don’t even need to do nothing. Be a man and take responsibility,” Negreanu said.

For his part, Ferguson has already made it clear that he’s “just [at the WSOP] to player poker.”

While many will see this is a weak copout, especially since any legal issues have already been dealt with, it’s clear Ferguson doesn’t want to get drawn into a debate over his time at Full Tilt. But for Negreanu, that’s just not good enough. Assuming his now-customary position as defender of the average poker player, Negreanu has vowed to confront Ferguson if they cross paths at a table.

“I can’t wait to get him at my table. Put us together at the Main Event feature table and we’ll see what happens there,” chirped the Canadian who recently became an American citizen.

There must be some reason for it

I was at a table nearby Jesus in the 888 event. I asked him hey Jesus where you been the last 5 years? He looked at me and giggled then I said looks like you kept your poker skills sharp by cashing several times and he was like yep.