Nebraska Poker Could Come as Early as November

Nebraska poker could soon be more than just the occasional home game. That’s because pending legislation that would legalize brick-and-mortar casinos could tangentially lead to land-based poker rooms in the Cornhusker State. 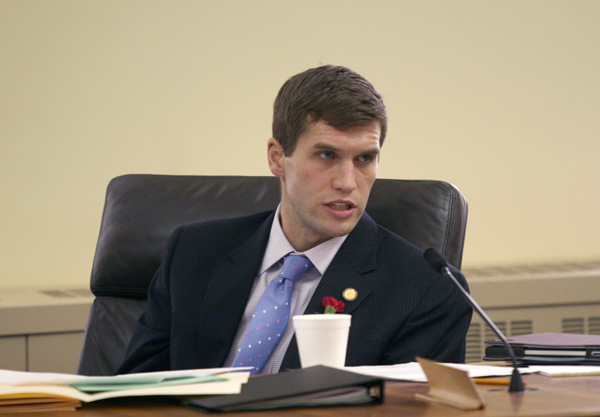 Nebraska poker cards in the air? It will happen if State Senator Tyson Larson, along with a pending citizen referendum, has anything to say about it. (Image: nebraskaradionetwork.com)

Legal poker rooms would only seem like poetic justice, as the creation of the game Omaha would seemingly have some connection to its eponymous city in Nebraska, although the history on this is sketchy, to say the least.

Currently most games of chance are illegal in Nebraska, forbidden by the state constitution, and that includes poker games.

Last year, a legislative effort by State Senator Tyson Larson (R-District 40) to have certain forms of poker legalized in bars and clubs was slapped down like the good senator had just asked the legislature to ban beef, corn, soy beans and pork futures. Interestingly, Omaha didn’t even make the list of the proposed allowed games.

But now, the tide is turning. A recent survey showed that 58 percent of Nebraskans support casino gambling, although this study was admittedly conducted by the group that has spearheaded the movement to legalize casino gambling. Studies like these are infamous for phrasing questions in such a way as to make it more likely they will get the desired end response.

The backing group is “Keep the Money in Nebraska,” which, as its name suggests, is concerned about the amount of hard-earned Nebraskan dough flowing east across the state line to its greedy neighbors in Iowa.

Now the Hawkeye State has a thriving casino industry, which, since it launched 25 years ago in the wake of the 1980s Farm Crisis, has sucked the Nebraska racing industry dry. All Nebraska has to offer in response, meanwhile, is one small casino resort and three underwhelming slots parlors, all of which are tribally owned and therefore, beyond the grips of most state laws.

“Keep the Money in Nebraska” is being spearheaded by stakeholders in the state’s embattled racing industry, primarily the Winnebago Tribe of Nebraska, which owns the Atokad Park (hint: read it backwards) racetrack in South Sioux City and curiously, the WinnaVegas Casino Resort in, well, Iowa.

The group has mustered the amount of signatures necessary to trigger a referendum on the casino question in November. Earlier this month, the petitions were delivered to the legislature in hired trucks, bearing the names of 310,000 signatories who had lent their support to the casino push.

The names of just 10 percent of the state’s registered voters were needed to take the issue to ballot in November, or around 113,900 people. Now Nebraskans who wish to exercise their right to play poker without driving across state lines will have a shot at doing so.

The casino movement will likely be met with opposition in state where voters have repeatedly rejected video gambling machine expansion. In fact, anti-gambling groups are already galvanizing a legal effort to have the measure kept off of the ballot.

This is not a done deal with the petition signatures. “Keep the Money” claims to have 300,000 signatures but that is on “3” different petitions and those have not be validated yet. They need 117,000 on the Constitutional change alone so they may be counting their chickens before they hatch.