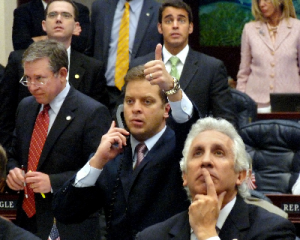 One has to wonder if the Department of Justice (DoJ) knew there would be so much backlash when they decided to reinterpret the 1961 Wire Act in 2011. Fifty years of precedent were thrown out the window as the ruling declared that the Wire Act only applied to sports betting and not online gambling – which obviously hadn’t existed when that became law.

Because of this, states could create legal Internet casino sites, and those with online gambling markets could now do business with each other. Delaware and Nevada, so far, have jumped at the opportunity to give players a chance at interstate online poker, for example.

But such a large step for the expansion of online gambling across the United States couldn’t go without opposition. Legislation to appeal the Wire Act’s reinterpretation has constantly made headlines in recent months. And now, two new organizations are picking sides in this heated battle.

A Decision for the State

The National Council of Legislators from Gaming States (NCLGS) is urging officials to oppose House Bill 4301/Senate Bill 2159, known as the “Restoration of America’s Wire Act.” The NCLGS feels that the bill would inhibit states’ ability to make decisions that best reflect the needs of its residents.

Rep. Jim Waldman (D-FL) – president of NCLGS –  wrote a letter to Senators Patrick Leahy (D-VT) and Chuck Grassley (R-IA), and Representatives Bob Goodlatte (R-VA) and John Conyers (D-MI) regarding the organization’s stance on the Wire Act. Waldman is firm that historically, states have shown an ability to regulate gaming in a proper manner.

“It is our strong conviction, as legislators who chair and are members of the legislative committees that work diligently to develop sound public gaming policy, that states are the most appropriate entity to decide upon, and oversee, what kind of gaming should exist and what should not within their borders,” wrote Waldman in the official letter.

Many who support the expansion of regulated online markets in the U.S. agree that the decision should be left up to the state. In his letter, Waldman references Congress’ Interstate Horse Racing Act as an example where states take responsibility for what kinds of gambling are legal within their borders, whether it is on land or electronically.

Waldman was clear that the NCLGS is not for or against the legalization of online gambling. He recognizes the complexities of the growing technologies the market uses and that they pose issues for policymakers. Still, Waldman says his organization is working on a State Internet Gaming Policy Framework that would safeguard those states who want to enter the market and those that don’t.

On the opposing side of the argument rests the National Association of Convenience Stores (NACS). NACS has decided to show its support for Sen. Lindsey Graham (R-SC) and Rep. Jason Chaffetz’s (R-UT) legislation. Senior Vice President of NACS Lyle Beckwith says that the Department of Justice’s decision has negative implications for the country.

“Because of this dramatic change, the Internet is poised to be the Wild West of gambling with individual states allowing gambling businesses of all kinds to set up shop online and prey upon vulnerable Americans without any federal check or consistency,” wrote Beckwith. “Not only would this put kids at risk and dramatically increase gambling addiction and related problems, but it would devastate NACS member businesses throughout the country.”

Beckwith’s argument is akin to that of others who oppose regulated online gambling. Those such as Sheldon Adelson claim that children and other “problem gamblers” are at risk with the ease of access online gambling provides. Beckwith also says that convenience stores depend upon lottery ticket sales for foot traffic. NACS feels that the Restoration of America’s Wire Act would solve these problems and hopes to see it pass.