College basketball fans who love upsets have been sorely disappointed with March Madness so far, as the NCAA Tournament has featured a historic level of domination by favorites in the opening rounds. 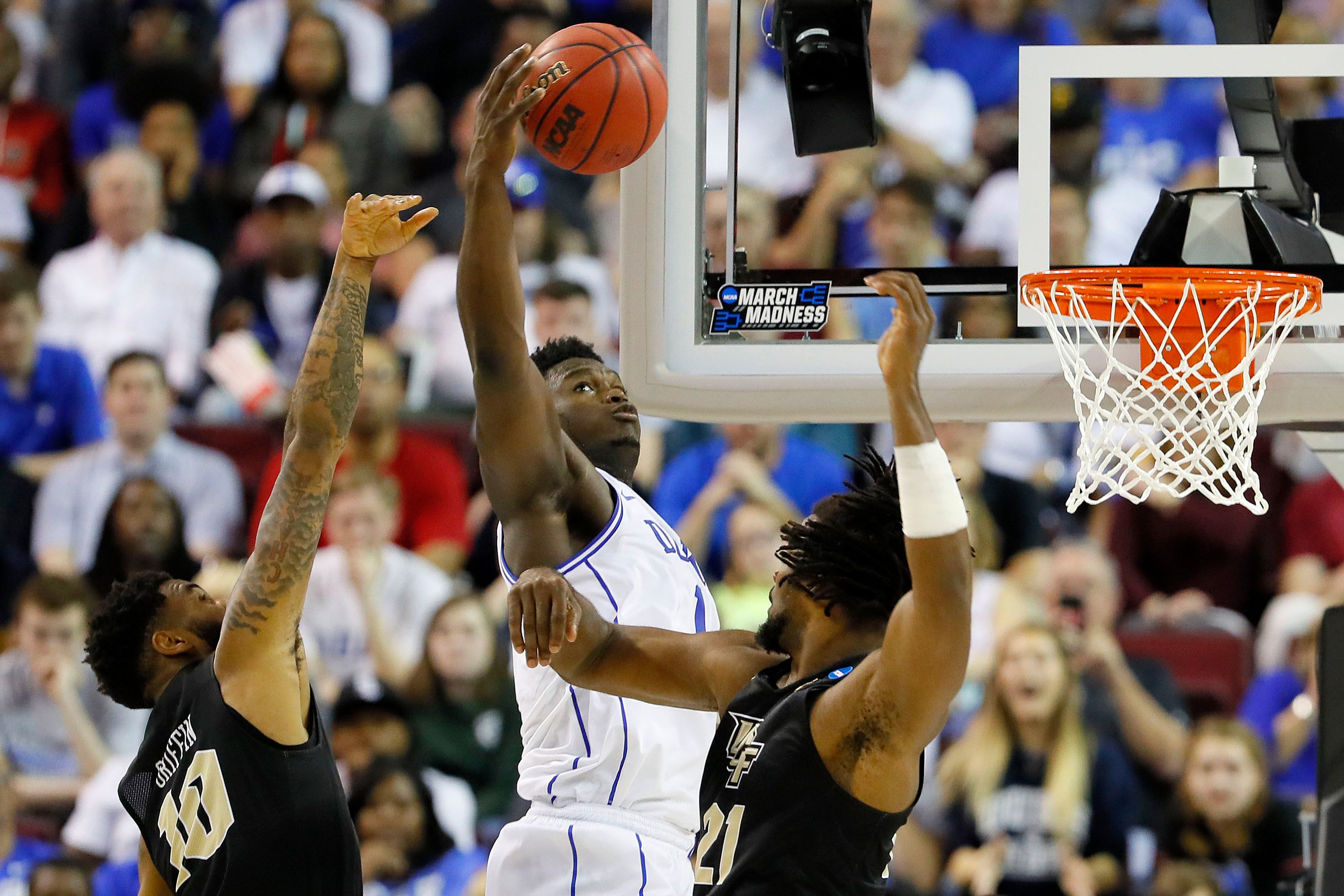 Duke’s Zion Williamson outleaps two UCF defenders during Duke’s 77-76 victory in the second round of the 2019 NCAA Tournament. (Image: Getty)

For the first time in tournament history, all 16 betting favorites won in the second round of the tournament, leaving a Sweet Sixteen that is conspicuously devoid of any Cinderella stories for American to rally behind this year.

Bettors Profit by Playing the Favorites

It’s not shocking that favorites have done well so far in the tournament: after all, teams are favored to win for a reason. But never before had the second round of the NCAA Tournament seen a complete wipeout of the underdogs. The closest calls in the past had come in 1991, 1995, and 2009: in each of those years, 15 of the 16 favorites pulled through to win their games.

Favorites even did well against the spread, with the teams laying points covering in 10 of the 16 matchups. The only lower seed to win outright was Auburn, which beat the Kansas Jayhawks 89-75. However, the Tigers were the favorite despite being seeded one slot lower than Kansas.

The number of favorites winning outright and covering the spread meant that there were some huge wins for bettors across the country.

At the Aria in Las Vegas, one gambler put $15,000 down on a nine-team parlay, taking all favorites. When the chalk managed to hold up, that lucky bettor walked away with $77,810.85.

What a hit — an Aria bettor just cashed a 9-team moneyline parlay for almost $78K. pic.twitter.com/gJn30ir4cf

But while the top teams in the country may have dominated – every top three seed in every region advanced to the Sweet Sixteen – not all of them made it look easy, and that left some gamblers sweating down to the final moments of Duke’s epic battle against No. 9 seed UCF.

Duke scored an unconventional four-point play late, and UCF’s final attempt to win the game rolled just off the rim, as the Blue Devils hung on for a 77-76 victory to survive and advance. That was welcome news for one William Hill bettor, who put down $50,000 at -1100 odds on Duke to win outright. When the Blue Devils managed to scrape by, that gambler won $4,545.45.

One of the most amazing bets of the weekend was also one of the smallest. One DraftKings user put up a paltry 14 cents on a 14-way parlay, covering the spread and the total on seven different games on Saturday. When they managed to hit on every single wager, that bettor won $1,345.78.

Overall, sportsbooks across the United States reported strong handle and plenty of excitement from fans placing their March Madness bets.

“The tournament’s been great for us,” Westgate Las Vegas SuperBook Vice President of Risk Ed Salmon told ESPN. “Thursday and Friday were really good, and handle has been above last year.”

While the lack of longshots remaining in the NCAA Tournament might seem boring to some fans, it should provide for compelling matchups in the later rounds. The Duke Blue Devils are a 2/1 favorite to win the championship according to William Hill, with Virginia (9/2), Gonzaga (5/1), and North Carolina (6/1) – the other three No. 1 seeds – following right behind them.