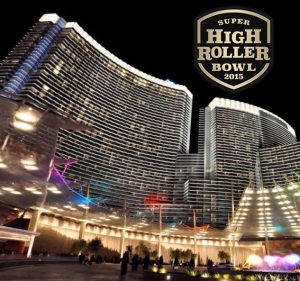 The Super High Roller Bowl is a $500,000 buy-in tournament in which all the money goes to the players. (Image: poekrstrategy.com)

Poker is due to return to NBC this summer.

It was revealed this week that the forthcoming $500,000 buy-in Super High Roller Bowl will be aired on NBC Sports Network from Friday, 28 August.

This will be the first time that new competitive poker content will be broadcast on the NBC network since the National Heads Up Poker Championship (NHUPC) was cancelled in 2013.

The NBC production had initially been put on ice in 2011 following the events of Black Friday, along with its other popular show, Poker After Dark.

It was a huge deal to the poker world when NBC first commissioned NHUPC, back in 2006.

This was the first time that poker had been shown on a major US network, and it felt like the game had truly arrived in the mainstream.

It’s good, then, to see poker back at NBC, but it also represents something of a coup for Poker Central, the new round-the-clock poker TV network that will debut on our screens on October 1.

The Super High Roller Bowl was devised, and will be produced, by Poker Central, as an inaugural project that looks like it’s going to make a big splash.

The Super High Roller Bowl is the first of a series of annual tournaments to be held at the Aria Resort & Casino from July 2 – 4.

This, of course, is the perfect way to get the top, top players to turn out, and it seems to have worked.

The winner, meanwhile, will be walking away with around $8 million.

“We are excited to bring this new world championship poker event to NBCSN,” said Jon Miller, President of Programming for NBC Sports and NBCSN. “With top poker players competing for an expected $25 million prize pool, the Super High Roller Bowl will make for compelling programming.”

Hopefully, once the cameras are rolling, Aria staff will manage not to accidently seat a player from the daily $125 buy-in into this particular high-roller, as was the case last week when a wide-eyed amateur was mistakenly entered into the $25,000 event.

Our hero kept his cool, lasted seven hours, and even managed to eliminate a couple of the world’s elite, including Thomas Marchesse, before being identified, disqualified and squarely told off.

I still laugh about that $125 buyin guy that entered the $25,000 event on accident and wrecked havoc for 7 hours. Paying $125 to enter a $25k event: Good deal. Being allowed to play for 7 hours and knock out professionals that had to be staked for $25k… PRICELESS!