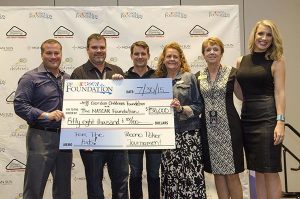 NASCAR drivers are known for pushing themselves and their cars to the limits on racetracks across the country.

But on Thursday night, the stars of NASCAR were racing chips rather than high-performance cars.

Some of the world’s most famous drivers were on hand at Mohegan Sun Pocono in Pennslyvania, there to play poker in order to benefit some very worthy charities.

The event is known as the Pocono Poker Tournament, and this is the fourth year that NASCAR has taken part in the charitable initiative.

The poker tournament is the first event of this weekend’s NASCAR festivities at Pocono Raceway, which culminates in the Windows 10 400 Sprint Cup Series race on Sunday.

Proceeds from the poker tournament are split between the Jeff Gordon Children’s Charity and the NASCAR Foundation, which raises money for children’s educational opportunities.

Gordon was among the drivers who participated in the tournament.

This is the first year that his charity, which helps battle children’s cancer, has been a part of the Pocono Poker Tournament.

“I’ve heard of this event for several years, and I’ve always wanted to get a chance to play in it,” said Gordon. “This is a fantastic opportunity for me to not only play for a great event and a great cause, but to interact with the fans.”

Gordon, who has won four Sprint Cup championships, announced earlier this year that he will retire from full-time NASCAR driving duties after this season.

Fans and others who wanted to participate in the tournament were able to donate between $50 and $250 for various packages.

For $50, fans could show up and attend as a spectator; $100 or more guaranteed a seat in the poker tournament, with higher donations offering attendance to a pre-event VIP reception.

This year saw the largest crowd yet turn out for the Pocono Poker Tournament, causing the event to be moved to the grand ballroom at the Mohegan Sun Pocono.

“It’s been getting bigger every year,” said Kevin Heaney, director of media relations for the Pocono Raceway.

Along with Gordon, Rusty Wallace was perhaps the most notable NASCAR celebrity to take part in the event. Wallace won the 1989 Spring Cup championship, and now serves as a broadcast analyst.

“What we’re going to do with the NASCAR Foundation’s portion of the money is keep it right here in Pocono,” Wallace said at the event. “We’re going to give all that money away to schools and teachers to help get the tools they need to support science, technology and math.”

Many other drivers were also in attendance.

The tournament featured a special prize for the highest-finishing fan who took part in the event.

They had the choice between a VIP race experience at Pocono Raceway this weekend, or a VIP “Stay and Play” experience at the Mohegan Sun Pocono.

While there was no word on who won the tournament, one winner was clear: the charities involved.

The NASCAR Foundation and the Jeff Gordon Children’s Foundation split $58,000 thanks to all of the participants in the event.

I think this may be the first time I have had an interest in a “NASCAR” event.