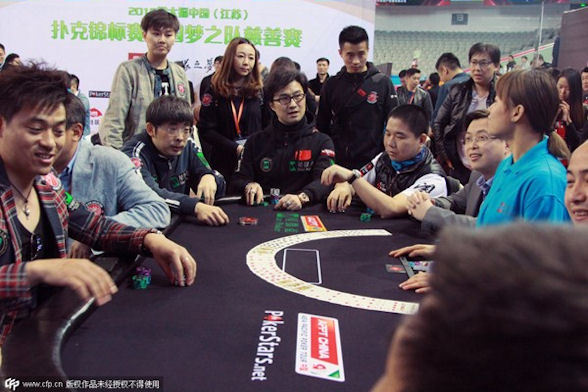 The Nanjing Millions featured PokerStars and APPT branding, and even drew Chinese celebrities to participate in charity events, but was shut down amid allegations of unspecified criminal activities. (Image: CFP)

The APPT Nanjing Millions was shut down last week before the second day of the reportedly PokerStars-backed tournament festival’s main event: that much everyone can agree on.

Beyond that, however, there seems to be plenty of dispute about exactly what went down and who was responsible for what was likely the most ambitious poker event ever attempted in China to date.

According to a report by the World Gaming Group (WGC), Chinese state television broadcaster CCTV and other media outlets in the country have provided heavy coverage of the Nanjing Millions shutdown, which took place last Friday in the middle of the series.

WGC says local citizens had taken their concerns to police over gambling taking place at the event, which apparently led to police shutting it down after several days.

These reports have been focused on the most sensational aspects of the investigation: the idea that it was a “criminal event” and that there were some Chinese celebrities participating in tournaments. Among those were reportedly musician Wang Feng, who was seen playing in a charity event during the festival, while two unnamed Olympic gold medalists also participated.

Many details about the situation are still unclear, however. First, there’s the widespread characterization of the shutdown as having been the result of a “raid” by police, which has been disputed by some. A report by Poker Asia Pacific said that their reporter at the event, Denny Wei, witnessed no such raid: police simply refused to allow the venue to open before Day 2 of the Main Event, which is what has been seen in the widely publicized pictures of the incident.

Another big question going forward will be which parties are actually responsible for the organization of the Nanjing Millions, and thus could be targets of any criminal investigation related to the event.

Local organizers are clearly in some trouble: according to the Xinhua News Agency, the Star Poker Club is “currently under police control” due to the allegations of gambling and criminal activity at the event.

But the fate of PokerStars and the Asia Pacific Poker Tour (APPT, which is also an Amaya property) is far less clear. Already, PokerStars has been distancing itself and the APPT from the tournament, saying they were only sponsors of the event, not organizers.

“The event itself was organized and operated by a local poker operator, Star Poker Club, and sponsored by APPT China,” PokerStars wrote in a statement. “We are in contact with Star Poker Club and are seeking additional details. The organizers have issued a statement apologizing for the inconvenience and plan to resume the tournament in the near future.”

The idea of resuming the tournament in the near future seems overly optimistic, to say the least, but there also seems to be dispute over PokerStars’ role: while they are clearly a sponsor and promoter of this (and many other) events, whether that raises them to the level of “organizer” is unclear, particularly as they sent a handful of staff members to help run the series.

What It Means for China in the Future

Finally, there is the important question of what this will mean for the future of live poker events in China. It seems to be clear that while local organizers have been assuring poker tours that they have the proper permissions to run such events, the central Chinese government may not agree.

While there have been successful APPT and WPT events in China in the past, there have also been events cancelled when local organizers couldn’t produce the assurances from provincial and national government officials that they claimed to have, and Chinese officials say that the Chess Sports Management Center has never approved Texas Hold’em events in the country.