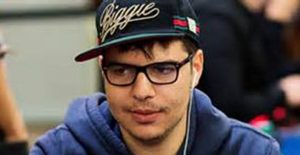 Mustapha Kanit won the SCOOP Main Event, earning himself a prize of over $1.3 million. (Image: HighStakesDB.com)

Winning the Spring Championship of Online Poker (SCOOP) Main Event is enough to make a poker player’s dreams come true, no matter what those dreams might be.

And while we don’t know exactly what Mustapha Kanit plans to do with his prize money, we are sure that $1.3 million can pay for a lot of lasagna.

The victory came with a prize of $1,304,720, one of the biggest prizes that will be awarded online this year.

The SCOOP Main Event is one of the rare Internet poker tournaments that is contested over two days, beginning on Sunday and ending on Monday.

That’s a long time to sit in front of a computer, but it was well worth it for the players who made deep runs: with a $10,300 buy-in, the tournament generated a prize pool of nearly $7 million, well above the $4 million guarantee.

While online tournaments are often full of players that are virtually anonymous, this isn’t the case in the major SCOOP events, as many of poker’s stars (particularly the younger ones) make time to play in these prestigious events.

Even on Day 2, many big names were still in contention, with players like Dan Cates and Grayson Ramage were still alive deep into the money.

As the tournament narrowed down to its final two tables, there were still some very notable names fighting for the SCOOP title.

Viktor Blom, also known as Isildur1, made his mark on the tournament before being bounced in 12th place, taking home $79,810 for his efforts.

Shaun Deeb continued a strong SCOOP performance by making it all the way to the final table before bowing out in seventh place ($225,550).

Ultimately, Kanit faced Emil Patel in heads-up play for the title. The final hand was one that may be remembered for a long time by those who watched the action unfold live.

In a three-bet pot, Kanit held Q♠Q♦ against Patel’s J♠T♥. The flop came J♦ Q♥ 9♥, giving Kanit a set against a very strong draw for Patel.

Things only improved for Patel on the turn, when the Q♠ gave him quads and a stranglehold on the hand. Despite the strong holdings for both players, however, both players checked to the river, when the T♥ hit the board.

Kanit decided to bet out, after which Patel made the decision to raise all-in. It took no time at all for Kanit to make the call with his four queens, making him this year’s SCOOP Main Event champion, while Patel had to settle for the $950,780 second-place prize.

For Kanit, the victory just continues what has to be the best month of his tournament career. In early May, he won the EPT Grand Final Super High Roller, earning over $1 million in the process.

In total, Kanit now has over $3.7 million in live earnings, and a reported $2.8 million more in online cashes.

It’s worth noting that Kanit wasn’t the only SCOOP Main Event winner. As with all other tournaments in the series, PokerStars held three versions of the event: a high, medium, and low.