The fourth annual $1,100 buy-in MSPT Venetian $2.5 Million GTD Main Event proved to be a record-setting affair, drawing 3,273 entrants over three starting flights. That made it the largest poker tournament in both Mid-States Poker Tour and Venetian history, surpassing last year’s field size of 2,887. 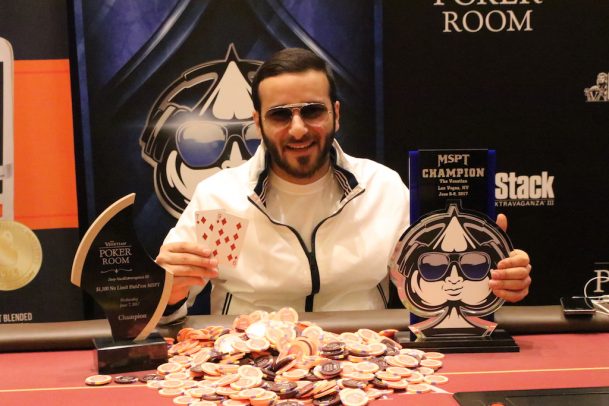 Nader Kakhmazov traveled from Russia to take down one of the year’s biggest no-limit hold’em tournament titles outside the WSOP. “I am cool, I am happy,” he said about the victory. (Image: MSPT)

The large turnout exceeded both expectations and the prize pool guarantee. In fact, at $3,207,540 the prize pool became the largest ever offered in the history of the MSPT, a traveling tournament series founded in 2009.

Even more surprising, and exciting for what it says about poker, this field draw came around the same time as the 2017 World Series of Poker was hosting a $1,500 no-limit hold’em event. That tournament drew 1,739 players and created a $2,347,650 prize pool.

The MSPT Venetian originated in 2014, and attracted 854 entries in its inaugural year. A $1 million guarantee was placed on the event the following year, which helped grow the field to more than double in size, with 1,964 entries.

In the MSPT’s stomping grounds back in the Midwest, the largest event was last month’s MSPT FireKeepers, which drew 1,066 runners and made it the largest poker tournament ever held in Michigan. Mike Shanahan won that event for $216,829.

After three days of play, Nader Kakhmazov from Russia emerged victorious in the MSPT Venetian to capture a $395,888 first-place prize.

“I am cool, I am happy,” said the 29-year-old businessman, who spoke very little English.

Kakhmazov began the final day as the chip leader. And though his position near the top of the leaderboard would fluctuate, he was still a solid contender with just three players remaining. There were some brief discussions about a three-way chop, but after talks of a deal fell through, Kakhmazov’s queen-jack suited got there to best Maury Solano’s Big Slick, leaving just two.

Heads-up began with Kakhmazov holding 26.9 million chips to Brayden Gazlay’s 22 million, This time they reached an agreement, deciding both players would lock up more than $300,000, no matter what happened, with an additional $70,000 and the title going to the winner.

Gazlay responded by shoving all in and Kakhmazov called. A 10♥ on the turn gave Kakhmazov a straight, which was good enough to beat Gazlay’s two-pair when a 3♥ blanked for both on the river.

Season 8 of the MSPT is now on summer break before returning July 20-23 for a $350 Regional at Potawatomi Casino in downtown Milwaukee, Wisconsin.