The Mid-States Poker Tour took a look at what poker players like to do best when they’re not playing their card game of choice, and came up with the obvious answer of “sportsbetting.” And from there, the brainchild was born to marry the two by creating a “Poker Bowl” over the same weekend that leads up to the Sunday, February 5 Super Bowl: the Grand Poobah of all sportsbetting in Las Vegas. 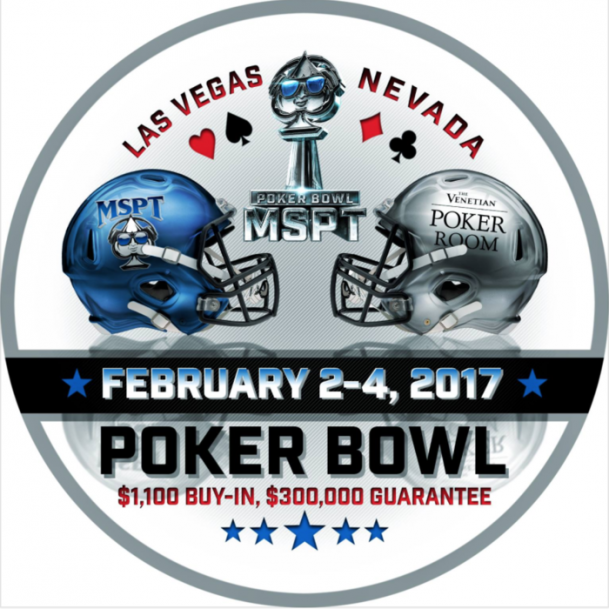 Season 8 of the Mid-States Poker Tour (MSPT) will be highlighted by a Poker Bowl (in conjunction with Super Bowl 51) at the Venetian in Las Vegas. (Image: MSPT)

From February 2nd through 4th, the MSPT and The Venetian will join forces for the $1,100 buy-in, $300,000 guarantee “Poker Bowl,” which coincides with the NFL’s Super Bowl Weekend. There will be two starting flights, coming at noon Pacific Time on Thursday, Feb. 2 and again on Friday, Feb. 3. Remaining players will return on Saturday, Feb. 4 to play down to a winner.

That means that all players are guaranteed Sunday, February 5 to be all clear to watch this year’s Super Bowl.

The “Poker Bowl” marks the first time the MSPT has visited The Venetian outside of the summer months. In June 2016, the venue played host to the largest MSPT in history, as 2,887 entrants took to the felt. Thomas Boivin emerged victorious in that event to win $352,153, the largest prize ever awarded on the MSPT.

Season 8 to See More Than 24 Locales

That’s one highlight of Season 8 of the MSPT, which kicks off this weekend at Potawatomi Casino in Milwaukee, Wisconsin. It marks the first of over two dozen stops across the country, which includes several State Championships and that inaugural “Poker Bowl” in Sin City.

Staying true to its Midwestern roots, the tour will have stops in Minnesota, Michigan, Iowa, Wisconsin, and Indiana. With the exception of Minnesota, the MSPT holds the rights to host the State Poker Championship in each of those states.