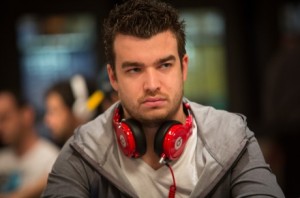 British poker pro Chris Moorman finally broke his tournament curse with a top finish in the LA Poker Classic for over a million-dollar win. (Image: pokernews.com)

For years, he’s been considered by many to be the best online tournament player in the world – and his online results backed that up – yet a major live tournament win still eluded him – until now. The UK’s Chris Moorman bested a field of 534 players to take down the WPT LA Poker Classic last week, for a first prize of $1,015,460 and his first major title.

From a Jack to a King

Known online as “Moorman1”, Chris Moorman has dominated the Pocket Fives online tournament rankings for years. The 29-year-old famously built his bankroll up from nothing – initially winning a freeroll for $70 and never looking back.

At the end of last year – seven years after that freeroll win – Moorman became the only player ever to top $10 million in online tournament winnings. Known for treating low-stakes tournaments as seriously as high-stakes ones online, Moorman puts in the volume, playing as many as 12 tournaments at once. It’s a formula that has enabled him to win more online tournaments than anyone else in the world. He also recently won “Best Online Tournament Player” at the British Poker Awards for the fourth year in the row.

It’s been a long road to success for Moorman, who, despite his online prowess, initially failed to transition easily into the tournament scene. But the writing has been on the wall recently. Moorman has come agonisingly close to the top spot in some massive live tournaments in recent years – in 2011, for example, he came in third once and second twice in WSOP events, including the €10k WSOPE Main Event. Then, in 2012, he was an EPT runner-up. In fact, before entering this year’s LA Poker Classic, his live tournament haul was almost $3 million.

Moorman came into the final table of the LA Poker Classic second in chips, trailing only professional player Michael Rocco. These two wrestled for the chiplead throughout the final, as players were eliminated around them, but it was during three-handed play that the Englishman really found his spot.

When Glen Lafaye raised from the button with Q-Js and Rocco shoved behind him with A-8, Moorman re-shoved, with tens, and Lafaye called. The flop of K-Q-J was looking great for the latter player, until a dramatic ace on the river gave Moorman a broadway straight and levelled the stacks as he and Lafaye went into heads-up play.

But now Moorman seized the initiative, dominating his opponent heads-up, chipping away at his stack, and finally sealing the deal when his aces held up against his Lafaye’s flopped straight draw. It’s pure relief for Moorman, who finally has expelled a particularly tenacious monkey from his back.

“I finally did it!” said his Twitter feed, simply.