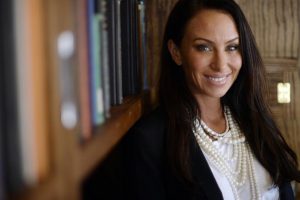 Molly Bloom’s book about running a high-stakes underground poker game that hosted top-flight Hollywood celebrities is being made into a movie. (Image: AAron Ontiveroz, The Denver Post)

Molly Bloom’s book about her glamorous underground Hollywood high-stakes poker games is being adapted for film by Oscar-winning script writer Aaron Sorkin, himself famous for movies such as “A Few Good Men,” “The American President,” and “Malice,” to name but a few of his prestigious credits for film and TV.

Sorkin is adapting the saga by Bloom, who was dubbed “poker princess” by the media after her arrest. Bloom was eventually sentenced to a year’s probation back in June, following an investigation by the Federal Bureau of Investigation (FBI).

Her book, “Molly’s Game: High Stakes, Hollywood’s Elite, Hotshot Bankers, My Life in the World of Underground Poker,” details eight years of her life running the most exclusive high-stakes poker games in the world.

According to her book, the games Bloom would host included Hollywood superstars, such as Leonardo DiCaprio, Ben Affleck, and Matt Damon. Bloom, currently 36, started as a waitress in Los Angeles and hosted poker matches at the Viper Room, a popular club in Southern California. Eventually, she ran into trouble with authorities once her operation started taking in a rake, rather than just tips.

The question of whether the same Hollywood celebrities who appear in the book would appear in the film remains to be answered. Without a script, there won’t be any deals, but with Aaron Sorkin‘s name behind the production, it’s certainly a possibility there could be a cameo or two once shooting begins.

In the book, Bloom was extremely complimentary of all of the aforementioned celebrities, but was purportedly critical of Tobey Maguire, who allegedly was a very moody player as well as a lousy tipper. According to an article published in the New York Observer, Maguire would apparently pay the $10,000 entrance fee for celebrity friends just to help in efforts to recruit billionaire businessmen to these exclusive games.

Aaron Sorkin is one of the biggest names in Hollywood, with his Oscar-winning script for “The Social Network,” which was an adaptation of the events that led to the creation of Facebook. The main character portrayed in the film, Facebook founder Mark Zuckerberg, has said that the film “made up a bunch of stuff I found kind of hurtful,” because he feels the reality of what actually happened didn’t align with the events of the film.

Which is why it’s called “dramatic license,” Zuck.

Known by that nickname because she hosted the top underground celebrity poker games, Bloom has said that she played a role in hosting games that were under the control of a gambling operation linked to the Russian mafia. According to federal authorities, the game laundered tens of millions of dollars.

Bloom was accused of hosting the games in New York, Los Angeles, Las Vegas, and Miami for a number of years, and saw celebrities including disgraced baseball player Alex Rodriguez and many Hollywood A-listers take a seat at her tables.

She was eventually given a year of probation and ordered to pay a $1,000 fine, plus perform 200 hours of community service, plus lost wages.

According to the Associated Press, her attorney stated that she had lost all of the $1 million the government said she earned through the games and now earns $19 an hour working at a friend’s business. Considering Bloom was looking at up to five years in prison, a year’s worth of probation wasn’t that bad of a deal.