Mizzi and Rast to Fight for Charity 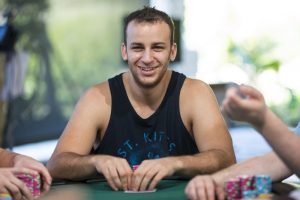 Sorel Mizzi and Brian Rast to fight each other in an effort to raise money for REG Charity. (Image: World Poker Tour)

Brian Rast and Sorel Mizzi will step into the ring and fight it out later this month; however, for once, it won’t be to boost their own bankrolls.

News of online poker players setting up high stakes prop bets in some form of martial art is something we’ve all become accustomed to over the last few years.

In fact, even in the last few weeks the community was given ringside seats to contract negotiations between Olivier Busquet and JC Alvarado who eventually agreed to a mixed martial arts bout worth $270,000.

However, this latest contest is a little different as the players aren’t doing it for themselves, but for the good of others.

Putting on a Show for Charity

Although previous contests haven’t exactly shown that poker players are the most physically imposing people on the planet, Mizzi and Rast will be hoping to put on a show for charity on December 30.

Both players are heavily involved with REG Charity and their fight will help raise money for the organization. Through a combination of ticket sales and donations, the two players hope to pack out Syndicate MMA in Las Vegas and raise thousands for REG and its beneficiaries.

So how exactly will Mizzi and Rast test their mettle and raise money for charity?

For the latest poker fight, the high stakes pros will compete in a boxing match that will take place over the course of four two-minute rounds.

There Will be Blood

Both players have been training for the bout for the last few months and in a series of tweets sent out earlier this week, Mizzi confirmed the details of the fight and even offered his own prediction on the outcome.

“It’s OFFICIAL, @tsarrast and I will be boxing on December 30th at 6pm @SyndicateMMA gym in LV #therewillbeblood,” tweeted Mizzi.

In contrast to Mizzi’s attack strategy, Rast decided to take a more subtle approach to the pre-fight mind games by tugging at his opponent’s heartstrings.

“@tsarrast: @sorelmizzi is going to try to beat down the same man he’s hugging on his twitter background picture,” Rast wrote on Twitter.

Whether or not there will be blood is unclear, but anyone interested in seeing the two players exchange blows in the name of charity will be able to from as little as $20 for regular admission and $80 for a VIP package.

As stated, all proceeds from the event will go to REG Charity which was set up by poker players as a way to maximize the EV of donating money to worthy causes.

The boxing match will be the charity’s latest venture into the sporting arena; however, according to the REG Twitter account, it will be the first of many sports-based fundraisers.