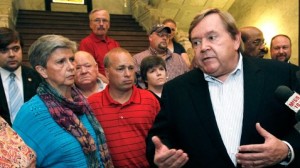 Mississippi Rep. Bobby Moak – shown here at the Capitol in Jackson in 2012 -is an online poker advocate in the state legislature. (Image: Rogelio V. Solis/AP)

It is time for Mississippi to look seriously at the issue of Internet gambling. While State Representative Bobby Moak (D-Bogue Chitto) has been pushing the topic for several years, most members of the legislature have had little interest in exploring the industry, as brick-and-mortar and riverboat casinos proliferate throughout the state. But with online gaming support gaining ground in many states and having been legalized in three, Mississippi  has now decided to look into it further.

The Internet gambling study was commissioned by the Mississippi legislature, and House Gaming Committee Chairman Richard Bennett announced a task force that will conduct the research. The purpose of the study is to compile the facts of online gambling as it pertains to other states as well as Mississippi, and thus encourage debate among legislators as to the potential for legality.

Hunker Down and Study

The task force entrusted with compiling the study will be chaired by Mississippi Gaming Commission Executive Director Allen Godfrey. Rep. Bennett believes Godfrey will deliver an “unbiased study,” which is not intended to make recommendations, but rather to look at the industry as it does and could affect Mississippi. The first goal of the group is to examine online gambling laws, efforts, results, and experiences in Nevada, New Jersey, and Delaware. There will also be a focus on sports betting, and other topics may be added per the requests of other legislators.

Bennett has requested the results of the study be submitted by the end of 2014. Bennett and Moak are two supporters of online gambling in some form for Mississippians. Bennett noted with regard to the study,” I don’t want to be holding the ball on this. I want to be out front.” Godfrey, on the other hand, doesn’t believe that the state is prepared to enter the world of Internet gaming, per a prediction he made in a January gaming report.

Moak has been in front of the state-led effort to legalize poker in America to no avail thus far. His latest attempt involves a bill to be introduced in 2014 to regulate online gaming in Mississippi, and the idea of the proposal alone was enough to spur others like Bennett to plan for hearings and committee meetings in the 2014 legislative session, despite admitting that a positive outcome is unlikely at this time. Even so, Moak plans to put the bill in front of fellow legislators for consideration.

The Internet gaming study is a step in the right direction, according to supporters. A report of facts and statistics may open the eyes of legislators and constituents to the idea that online gaming could enhance the gaming offerings of Mississippi without harming – perhaps even improving – the revenue of the numerous casinos currently in the state. Complicating matters is the relationship of the state with Native American tribes and their casino interests, but the study may be a catalyst for a reasonable discussion.

One person unwilling to give up is Moak. He introduced bills in 2012 and 2013, each seeking to launch Internet gaming in Mississippi. However, neither bill made it through its first committee and failed to garner significant co-sponsors. Moak plans to continue his crusade for the industry. Whether due to the ties to casino entities like Ameristar Casinos and Penn National Gaming – both past contributors to his campaigns – or his genuine interest in garnering additional revenue for the state, Moak is dedicated to the cause.