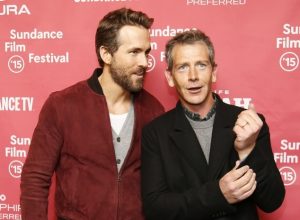 Ryan Reynolds and Ben Mendelsohn, who star in Mississippi Grind, which premiered at the Sundance Film Festival over the weekend. It could even be the poker movie we’ve all been waiting for. (Image: Danny Moloshok/Invision/AP)

Mississippi Grind made its Sundance Film Festival debut this week, and stars Ryan Reynolds and Ben Mendelsohn were there to do the inevitable publicity mill dance.

The film, which premiered at the legendary Indy film festival over the weekend, has echoes of Robert Altman’s poker road movie California Split, and stars Reynolds and Mendelsohn as two lost souls, gambling their way across the South.

It’s had rave reviews, which begs the question: is this the “good” poker movie we’ve been waiting for these past 16 years, since 1998’s Rounders?

We’ve had a seemingly endless procession of turkeys since then, but this one really could be different. It’s a movie that Variety described as a “bittersweet, beautifully textured road movie that plays like a conscious throwback to the lost souls and open highways of 1970s American cinema.”

Excited? Well, don’t go bananas just yet. Some reviews have been more guarded, such as The New York Times, which, while conceding that it was “beautifully shot,” was concerned that the “lack of answers” in the film might be “infuriating to some.”

Guess we’ll have to make our own minds up when it comes out on general release.

Preparing for the Role

One thing is for sure, though: the two leads were worked hard during the production. According to the Mail Online, to prepare for their roles as expert gamblers, the pair went out on the town with what Mendelsohn describes as a “poker czar” before they were “thrown to the wolves with genuine, 14-hour a day sitting at a table grinding killers.”

“They see us coming and they slide over to that table,” added Reynolds.

It doesn’t appear that Reynolds is going down the same road as Matt Damon, who remains a keen poker player since he caught the bug from starring in Rounders, however; in fact, he concedes that his poker playing skills remain spotty at best.

“I noticed that they were more afraid of me. The idiot who shows up at the table and doesn’t know what he’s doing is the most dangerous,” he said.

Actors Who Caught the Poker Bug And Never Recovered

Damon’s buddy Affleck is also an avid poker fanatic and took lessons from Annie Duke back in the day, which lead to a host of “are they, aren’t they?” type questions from people with absolutely nothing better to do. In 2004, he won the United States Poker Championship for $356,400, his only ever cash listed on the Hendon Mob database.

These days he prefers to conspicuously count cards at the blackjack tables, it appears.

Maguire is rumored to be the best of the Hollywood A-list bunch when it comes to poker. He’s been tutored by Daniel Negreanu, has WSOP cashes, and once came in 24th in a WPT event. Phil Hellmuth once stated that Maguire had won $10 million playing high-stakes Hollywood games.

Meanwhile, poker hostess Molly Bloom was less than complimentary about Maguire’s behavior in her tell-all book (with the lengthiest name ever  in the history of books: Molly’s Game: From Hollywood’s Elite to Wall Street’s Billionaire Boys Club, My High-Stakes Adventure in the World of Underground Poker) about these very games, calling him a “bad loser and an even worse tipper.”