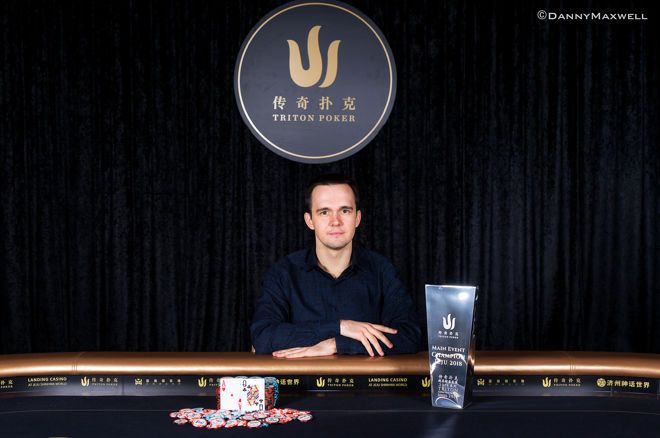 The ever-stoic Mikita Badziakouski seems to have a knack for taking down big Triton-branded high roller main events, and can be seen here smiling after just winning more than $5 million. (Image: Danny Maxwell/Triton Poker)

Mikita, who also uses the name “Nikita,” has quietly become one of poker’s top high rollers on the cash game and tournament circuits.

Justin Bonomo has been desevedly getting most of the attention from the poker media in 2018 for the insane heater he’s been on. But with this win in Jeju, South Korea, Badziakouski now deserves his time in the spotlight.

The Belarussian has cashed for more than $7.4 million this summer. His rungood began in mid-May with his first Triton Super High Roller Main Event title in Montenegro, which netted the young pro $2.5 million, which he followed with a 4th place finish in the Super High Roller Bowl in Las Vegas in May ($1.6 million) and a 5th place finish in a short-deck tournament last weekend at the Triton series in South Korea ($588,692).

Badziakouski now has $16.6 million in lifetime tournament winnings, far and away the most for anyone from Belarus, with $10.5 million earned this year. He’s an up-and-coming star but the poker world likely won’t get to know much about him other than his poker abilities any time soon.

Who Is This Guy?

After winning his first Main Event title in the spring, he refused to do interviews with the media. On Wednesday, following his second victory, he told a reporter that interviews are “not my thing,” but said he would do “a short one, no more than a few minutes.”

In that brief interview, we learned he also likes chess and sports betting and can’t imagine life without poker. That’s about it. When old-school poker players who enjoy watching and playing with charismatic people mention the younger, robotic players are ruining the game, this is what they’re talking about.

Badziakouski rarely speaks at the poker table or gives off much emotion. To some, that style of play is dull and scares away the casual poker fans. But you can’t question his results.

He beat a brutal final table that included high stakes giants such as Jason Koon, Sam Greenwood, and Sergio Aido. And he’s done that twice in just three months. It’s safe to say that “boring” style of play suits him well.

After winning a race against Leong to finish off the tournament, Badziakouski briefly smiled and shook his opponent’s hand. That was about the most emotion he showed the entire tournament.

With that, the summer version of the Triton Super High Roller Series has come to an end.

I’ve always been curious to know what the ‘other day’ feeling is like after an achievement like that. On waking up the next day, what is going on in the head of a player who got such a big award?

Does he feel like an ‘invincible superman’ or is ‘just another day’…? Poker is a surreal game, is not it? It’s a really big award, congratulations!

Kinda wondered the same thing about the (11 players from San Jose-based branch of Wells Fargo) who won the $543 million Mega Millions lotto prize last week. Finally, some good advertising for WF, which has agreed to pay a $2.09 billion fine for issuing mortgage loans it knew contained incorrect income information.