The Macau Poker Cup 28 wrapped up over the weekend at the PokerStars Live Macau City of Dreams and awarded four more PokerStars Players NL Hold’em Championship (PSPC) Platinum Passes, each worth about $30,000. 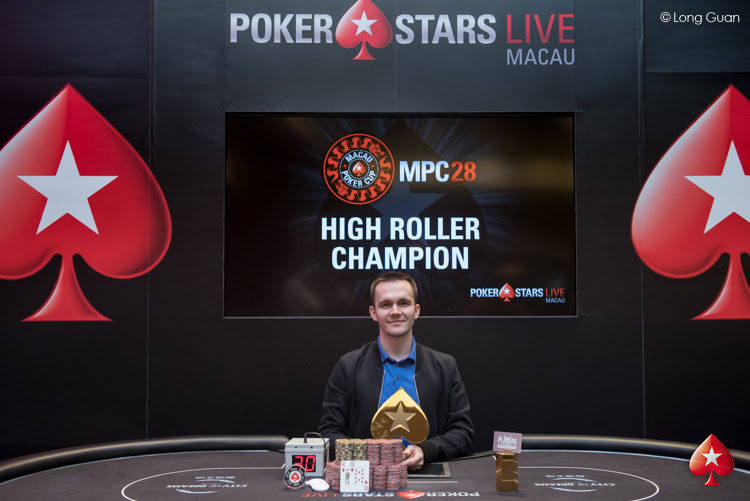 Mikita Badziakouski added to his lead atop the Belarus all-time poker money list. He now sits with more than $6.6 million, nearly $4 million ahead of the closest competition. (Image: PokerStars)

The HK$80,000/$10,229 buy-in Macau Poker Cup 28 High Roller, which featured unlimited re-entries and a shot clock, drew 124 runners to create a $1.2 million prize pool. Belarus’ Mikita Badziakouski began the final table as one of the short stacks, but hung in there to mount a comeback and win the title for $297,169.

Badziakouski began heads-up a huge lead over Spain’s Raul Martinez, and it didn’t take long for things to come to a head. In the final hand, Martinez moved all in holding K♠4♣ and Badziakouski called with a dominating K♦10♦. The board ran out 8♣8♥7♣A♥3♠ and Martinez had to settle for second place, but still a career-high $200,755.

“There were a couple of very strong professionals,” Badziakouski told Macau Poker Cup officials after the win. “I was just playing my normal game.”

The Macau Poker Cup win gave Badziakouski more than $4.8 million in tournament winnings over the past 12 months. That included $420,255 for defeating Tom “durrrr” Dwan heads up in the 2017 MBP Spring Challenge Super High Roller last March. In October, Badziakouski had another big score in Macau finishing second to Wayne Yap in the 2017 ACOP Single Day High Roller for $516,536. 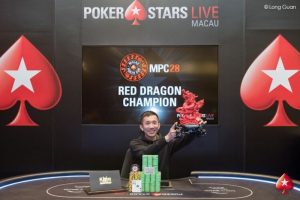 In January, China’s Alvan Zheng, a 29-year-old quantity surveyor, finished seventh in the ACOP Platinum Series XX Main Event. A month later, he returned to the island and came out on top of a 1,122-player field to win the Freezeout Macau Poker Cup 28 Red Dragon for HK$3,055,000/$390,692.

To win the title, Zheng had to go through Junhao Hong in heads-up play. The duo began the match with over 100 big blinds each, but it didn’t take long to crown a winner. A preflop raising war saw more than 4 million chips get in before the A♥10♦5♥ flop.

The rest of the chips went in with Hong holding the 10♠4♠, which was way behind the A♠A♣ of Zheng. The J♠ turn left Hong drawing dead, and he hit the rail in second place. As for Zheng, it was his second major win after prevailing in Macau’s largest-ever tournament field (2,343 entries) in the January 2016 Macau Millions for HK$911,000/$117,390.

“This is the biggest moment in my poker career, I’m very excited right now,” Zheng told officials after the win.

“If I can win that tournament, it will definitely change my life,” Zheng said about winning the $30K PSPC Platinum Pass. “In the Bahamas, I’m looking forward to playing against Martin Jacobson, Alan Lau, and Daniel Negreanu.”

Belarusian players have greatly step up recently. I have been watching them for a long time, and I admit that their results are improving. This applies to online poker as well. Such a significant success of Mikita will certainly attact a new players into poker. Everyone needs own poker heroes, there’s no way! Congrats, Mikita!