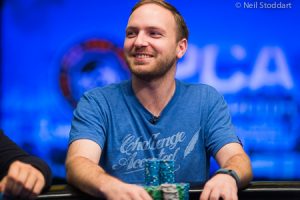 Watson and Gregg agreed to a deal prior to the final confrontation.

Thus, the 31-year-old Newfoundlander picked up a total of $ 728,325 for his win, bringing his lifetime haul to over $9 million.

There has always been something a little special about the PCA, a festival that sits right at the top of every tournament players “must win” wish list, perhaps because its high buy-in events regularly attract some of the toughest fields in poker.

The PCA is the poker festival for the cream of the crop, and this was reflected in the six-handed final table, which included the likes of former EPT winner Toby Lewis (4th), as well as Vladimir Troyanovskiy (5th), and Phillip McAllister (3rd).

Man on a Mission

This final table may have been super-tough, but it was hardly brain surgery, as Randy Kritzer, a neurosurgeon from North Carolina and the table’s only amateur, was hoping to prove.

Unfortunately for Kritzer, he exited in sixth place and will be back poking around inside people’s craniums come Monday morning, albeit $207,940 richer.

Meanwhile, Gregg was a man on a mission. Incredibly, this was his third PCA Main Event final table.

As you may remember, he also came in second in this event in 2009, during the PCA’s heyday, when second place would get you $1.7 million, and then in 2012, he came sixth.

Gregg was determined to improve on his previous attempts and see this one out to the bitter end, but instead, his end was bitter, leaving him in yet another runner-up spot.

But Watson’s victory was no easy feat.

“Tony [Gregg] was definitely not on my list of people to end up heads-up against in the PCA main event,” Watson told PokerNews afterward. “It was a tough match. It was very methodical. No one was trying to play big pots just for the hell of it. Even though there wasn’t so much money on the line [after the chop] it was still a toughly contested heads-up match.”

Despite beginning the match-up with a chip disadvantage, Gregg clawed his way back to even, before losing a big pot in level 34 when he was forced to fold, having been check raised all-in on a 3-bet flop.

It was the turning point of the game, and Watson now had his opponent on the ropes, finishing off the job soon after by outdrawing Gregg’s top pair with a four to a flush.

“It’s a big one for me,” said the champ. “Anytime you win a main event with such a big field it definitely has a special feeling, and with the PCA being one of the flagship events of the EPT and the entire poker calendar makes it a very special one to win.”

My question is why did he chop if he was a 2:1 chip leader going into heads up?

it is standard in Pokerstars sponsored tourneys .