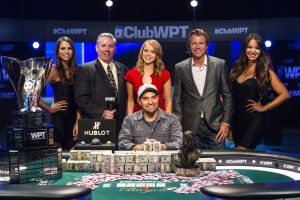 Freddy Deeb nearly captured his third career World Poker Tour title this weekend, but it was not to be.

Instead, Mike Shariati captured the largest win of his poker career, earning $675,942 by taking down the WPT Legends of Poker event at the Bicycle Casino in Los Angeles.

The Legends of Poker attracted 786 players, all of whom put up the $3,700 buy-in in the hopes of adding a WPT title to their resume.

But when the final table of six was set, it was clear that one player was looking for a different type of poker immortality.

Deeb entered the final table with a chance to win his third WPT title. That would have put him in elite company, as only Gus Hansen, Carlos Mortensen and Anthony Zinno have previously won that many tournaments on the tour.

But Deeb would have some work to do. He came in to the final table in third place, behind Shariati and chip leader Aaron Kweskin, who was in commanding position with nearly 100 big blinds.

After Jablonski went out in fifth, it was Shariati’s turn to do some chipping up, as he surprisingly eliminated Kweskin in fourth place.

While Deeb and Shariati were now both in excellent position, it was Deeb that would take the advantage into heads-up play. Just four hands after Kweskin’s elimination, Brent Roberts got his money in with pocket nines, only to watch Deeb turn over aces.

Roberts would not improve, busting in third place to take home $251,035. That gave Deeb a little less than a 2-1 chip lead over Shariati heading into what would become a titanic heads-up battle between the two players.

While Deeb may have started with the lead, it took Shariati less than a dozen hands to regain parity, after which the two spent about 50 hands trading the chip lead back and forth.

Deeb then appeared to gain control of the match, knocking Shariati down to less than 2 million in chips out of the 23.5 million in play.

But Shariati wasn’t done. Holding K6 against Deeb’s A3, Shariati was down to the river needing a pair to survive, and found a six in order to keep his tournament alive.

Deeb had another chance to end the tournament just two hands later, but Shariati survived a sweat that included a royal flush draw for Deeb to once again double up.

The battle raged on for an incredible 117 hands of heads-up play. Finally, with Shariati holding a nearly 3-1 chip lead, the 201st hand of the final table proved to be the last of the tournament.

With the money going all-in pre-flop, Deeb found that his K♥T♠ was far behind Shariati’s Q♥Q♠. Deeb did flop a ten, but still needed more help to catch up with the pocket queens.

When neither the turn nor the river offered any improvement, the tournament was over, with Deeb taking home $383,090 for second place.

While the result may have been disappointing for Deeb, it was a breakthrough for Shariati.

Prior to this win, his largest cash had been a $275,000 prize he earned for winning the Mega Millions XII at the Bicycle Hotel and Casino in March. Shariati’s career winnings now stand at $958,875.