Welcome to the World Poker Tour (WPT) Champions Club, Mike Sexton. The legendary poker player and broadcaster dominated the final table at WPT Montreal on Thursday, taking home $317,896. He will be automatically entered into the season-ending Tournament of Champions. 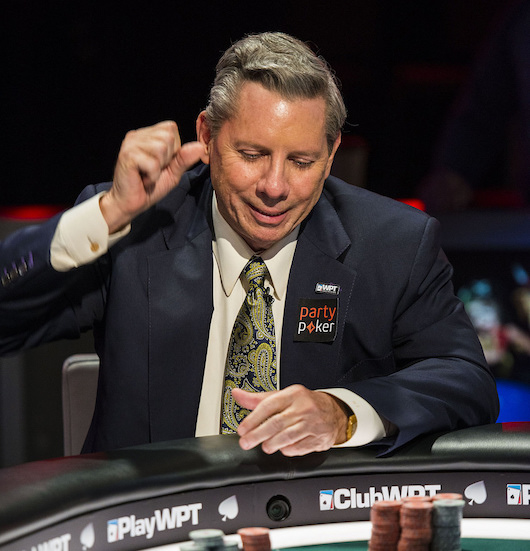 Sexton, of course, is the long-time announcer for the World Poker Tour, but had never won a tour event. Heading into the final table on Thursday, he held a slight chip lead over Canada’s Ema Zajmovic, who ended up finishing in 5th place ($76,127).

After 646 players were eliminated, the poker announcer was heads-up against Benny Chen for the title. It took just 106 hands to go from six players to two. But the heads-up match went down similarly to Gordon Vayo versus Qui Nguyen in the WSOP Main Event earlier this month.

Sexton began heads up play with a massive chip disadvantage (10-1), but fought back. Neither player would give in. Sexton and Chen went back and forth for hours when, on the 158th hand of heads-up play, the legend got it all-in with pocket queens against Chen’s K-J, and the best hand held up to finish off the tournament.

Chen received $213,535 for his second-place finish, his first cash ever in a WPT event. For the first time, Sexton wasn’t responsible for toasting the winner, since he was the winner.

Many watched the final table live online and nearly everyone was cheering for the Poker Hall of Fame member. After the tournament concluded, some top pros took to Twitter to congratulate the 69-year old poker legend.

“Wow! Congrats to @MikeSexton_WPT on taking down the title! Honor to do the @WPT live stream on this memorable night!,” pro Jeff Gross said shortly after concluding his final table broadcast.

“OMG congrats @MikeSexton_WPT!!! Coolest thing I’ve seen in poker in quite a while!,” Brian Hastings Tweeted.

“I think the last time @MIkeSexton_WPT won a tournament it was for a million against me! Well, he just won another big one! Congrats Mike!,” Daniel Negreanu posted.

The Man, The Legend

Mike Sexton was already a legend before conquering Thursday’s WPT Montreal final table. As a broadcaster, having announced every televised WPT event, and as a player. Sexton has 62 WSOP cashes, one bracelet, and nearly $2.6 million in lifetime winnings at the World Series of Poker.

Recently, Poker Central featured his life story in a Pokerography episode. If you haven’t seen it, do so. You’ll learn all about Sexton’s life as a poker player and broadcaster, how he helped create Party Poker, and why he’s so important to the game of poker.

Sexton likes to say, “may all your cards be live and your pots be monsters.” On Thursday, he was the beneficiary of those monster pots. Good game, Mike, good game.

Couldn’t have happened to a classier guy! Congrats to Mike Sexton!

Congrats!! He’s a great host for the WPT and a pretty damn good player too.