Sadly, all good things must come to an end. The World Poker Tour (WPT) has announced Mike Sexton will be retiring from the broadcast booth for Fox Sports televised events that he’s filled since 2002. Tony Dunst will take over the legendary announcer’s role, where he’ll be joining Sexton’s longtime co-host, former tennis pro, and TV personality, Vince Van Patten. 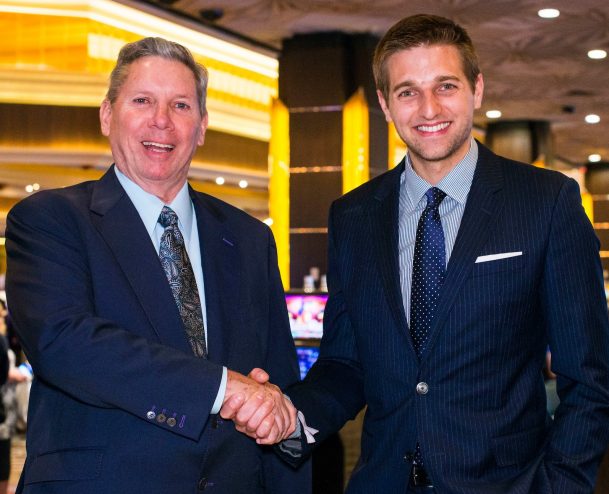 World Poker Tour (WPT) host Mike Sexton (left) has decided to retire from TV, and will hand over the reigns to Tony Dunst. (Image: wpt.com)

Dunst has some big shoes to fill. Sexton has not only announced WPT events from Day One, he’s been the face of the organization. But the show must go on. And Dunst isn’t stepping in as a neophyte TV face by any means. The Wisconsin native has long been host of WPT’s “Raw Deal” segment and he knows the game of poker, having been a successful live, as well as online player, with over $2.8 million in live tournament cashes.

Also there to make sure viewers don’t get the withdrawal shakes will be anchor Lynn Gilmartin, who’s in her fourth year as a WPT television presence.

Back to His Roots

Sexton won’t be riding off into the sunset never to be heard from again, mind you. He’s going back to the online poker site he helped launch, partypoker, stepping into the role of chairman. On his recently updated Twitter bio, the Poker Hall of Famer says he plans to help make his poker site the best in the business.

PokerStars has approximately 70 percent of the market covered. So for partypoker to challenge that reach, Sexton will need to pump up his business game to full volume.

Ace in the Hole

It wasn’t an easy decision for the 69-year-old to leave the broadcast booth. He didn’t explain why he felt now was the time to step away from broadcasting, but he thanked those who’ve helped make the WPT successful on his way out.

“It has been an honor and a privilege to work with the World Poker Tour since its inception in 2002,” Sexton said in a press release. “When the World Poker Tour launched, it was a dream come true, and to be there from the beginning and see how the WPT changed the poker world forever by essentially turning poker into a televised sport has been amazing. And to do it all this time with my co-commentator from day one, Vince Van Patten, has made it even more special.”

The World Poker Tour was the first to televise the game with exposed hole cards for viewers to feel like they were there in the moment. There’s no question that Sexton, along with producer Steve Lipscomb, played key roles in bringing poker to millions across the globe. The WSOP and other televised poker events followed suit.

In the press release, Sexton thanked Lipscomb, current WPT CEO Adam Pliska, and the “entire WPT family.” On Twitter, he gave Dunst a vote of confidence, letting him know he “will do a great job.”

Sexton, of course, has long been one of the game’s top ambassadors. And he didn’t become a Poker Hall of Fame inductee just for his pretty face. Mike is a WPT champion (2016), a WSOP bracelet winner, and has more than $6.5 million in live tournament winnings.

The broadcast booth just won’t be the same without him. Good game, Mike. We’ll miss your memorable signs-offs and distinctive voice. Live long and prosper.

Mike was an inspiration to all poker pros, wannabe poker players and fans alike. The man was the epitome of “class act”. Best of luck in the future.