Mike Postle filed a motion earlier this week to have a civil suit dropped. The alleged poker cheater’s lawyer claims there isn’t enough evidence to take the case to trial. But for this edition of Flashback Friday, we’re going to show you a suspicious hand he played at Stones Gambling Hall that may serve as one small, but potentially damaging, piece of evidence. 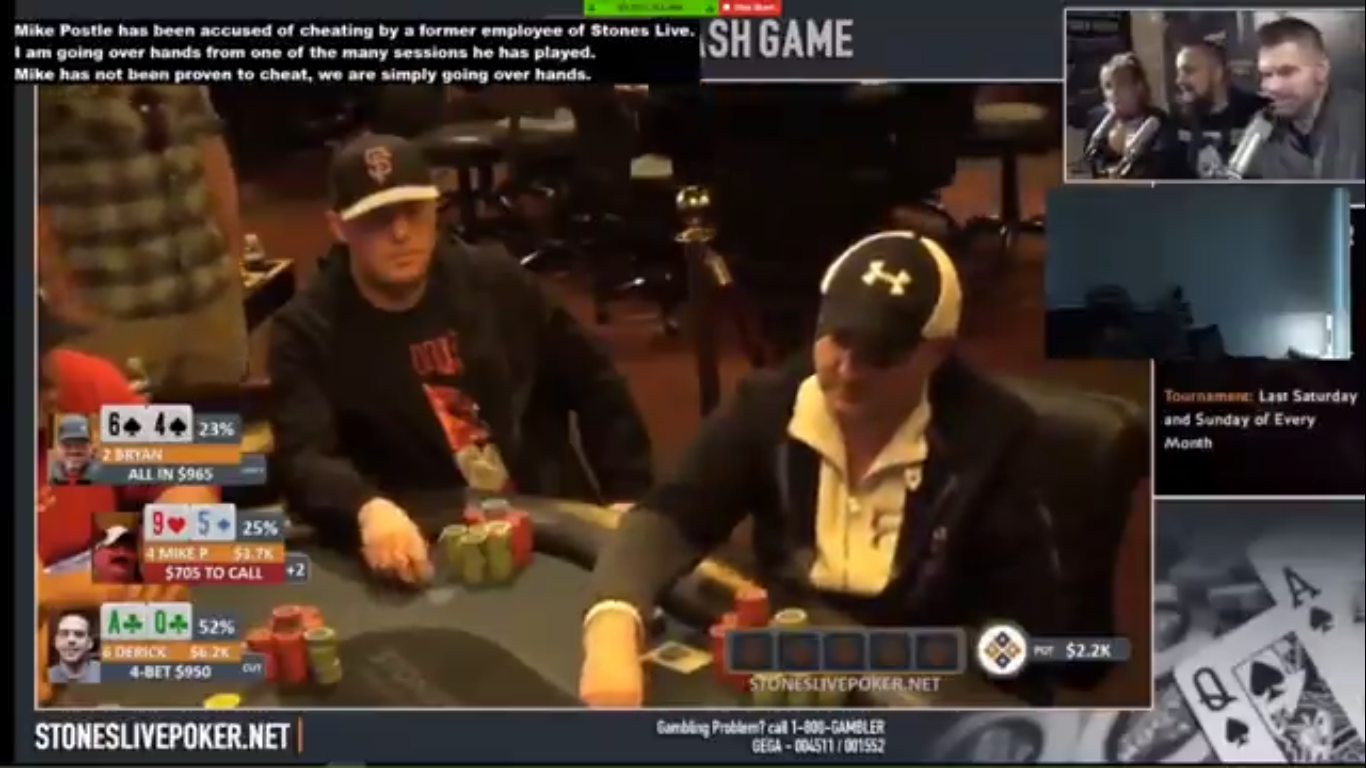 We need to make this very clear: Mike Postle is innocent until proven otherwise in a civil court. That said, many poker players have conducted their own investigations into Postle’s play, and most have come to the conclusion he is guilty. But he deserves his day in court and an opportunity to present his evidence — evidence that those who have already presumed his guilt aren’t privy to at this point.

What’s This All About?

If you didn’t pay attention to poker media back in October, you may be wondering what in the heck we’re even talking about. Postle is a poker pro from Northern California who regularly competed on the “Stones Live” streams at Stones Gambling Hall.

In late September, Veronica Brill (@Angry_Polak) accused Postle of cheating during Stones Live cash games. She called for a third-party to investigate her claims. Brill argued that Postle’s win rate was nearly impossible and that he always seemed to be making the correct decisions on the river. That led poker players such as Joe Ingram to investigate the accusations. His conclusion? Postle is either some sort of poker god or was using an electronic device to gain access to his opponent’s hole cards.

Mac VerStandig, a poker lawyer, is representing 25 plaintiffs in a $10 million civil suit against Postle. Postle’s attorney, William Portanova, filed a motion this week to have the case dismissed. He argues there isn’t sufficient evidence against his client to proceed with the case. But this video, courtesy of Doug Polk’s now retired YouTube channel, brings that claim into question.

The above hand is, by itself, proof of nothing other than that Postle played one hand poorly, based on sound poker strategy. There are hundreds of other hands out there in which Postle makes questionable decisions to win a big pot. You can watch those over at Joe Ingram’s YouTube channel. But this hand sticks out because of how Postle reacted, and it could serve as a damaging piece of evidence in court.

The hand in question begins with Postle raising to $60 in early position with a garbage hand (9-5 off-suit). A player named Bryan then three-bets to $260 with another junk hand (6-4 suited). That odd play was followed up by Derrick, who four-bet to $965 with a strong hand (A-Q suited), which was enough to put Bryan all in.

Postle and Bryan both made the call with their mediocre hands, and saw a flop of J-9-3, completely missing Bryan and Derrick. Postle, with middle pair, instantly jammed all-in for over $3,000. That risky move, shoving with middle pair into a pre-flop four-bettor, forced a fold.

The play in itself was strange — risking so much on such a terrible pre-flop hand, and then jamming with only middle pair. Why was he so confident, given the aggressive action before the flop, that his pair of nines was good? We may never know, but the hand gets even more suspicious after that when Postle potentially blew his cover.

With Postle and Bryan now playing for the main pot, the players kept their cards face down even though Bryan was already all-in and all betting had concluded.

The turn was a 7, giving Bryan a gut-shot straight draw to stay alive.

“Oh, s**t,” Postle immediately mumbles, as if he somehow knew his opponent now had a draw.

But, if he wasn’t cheating, how did he know the 7 gave Bryan a straight draw? After all, he still hadn’t seen Bryan’s hole cards. Things that make you go hmmmm.

Maybe he really is a poker god.

A strange story. If Mike Postle cheated, how did he do that?

First of all, there is no “proven guilty” in Civil Court. That is a criminal setting and requires a entirely different burden of proof. Civil Court is a court of equity (being poker players, we can all relate to that). These courts were designed to “make people whole again,” such as when you are injured by someone else’s negligence and have medical bills, lost wages, ect. The standard of evidence in these type cases are “preponderance of the evidence” and NOT “beyond a reasonable doubt” like a criminal trial. There is a HUGE difference. Beyond a Reasonable Doubt is ONLY used in criminal settings for a reason. It is the most difficult level requiring that the prosecution remove all reasonable doubt from the jury. In contrast, the Preponderance of the Evidence, means you only have to convince a jury that something is more likely to have happened than not. If the scales are 50.1% to 49.9%, then the Plaintiff can win. Another key difference is that there is no prosecution here. That would involve the State or Federal authorities. In this case, you have a class of Plaintiffs.

I say all of this hoping people will not be confused when Postle loses and proclaim him guilty. I AM NOT a supporter of Postle, but I do believe in Due Process.

Technically, civil cases are not necessarily in “equity.” In America’s past there were separate courts of equity and courts of law. Courts of equity were a later creation and were designed to provide an opportunity for justice even when no action (suit) at law existed. The proper forum for a case depended on the legal theory of the case i.e. whether the cause of action was in law or in equity. For many years the courts of equity and law have been merged into one court but whether the cause of action is in equity or in law makes a difference for a variety of reasons, including which defenses apply. So, a civil case can be either in equity or in law depending upon the theory brought by the plaintiff. In fact, many civil cases are brought under multiple theories, some in equity and some in law.