Mike Postle is accused of some serious cheating allegations that, if proven true, could leave a lasting negative impact on the poker world. But, he sure does seem to be doing a great job of bringing the poker community together. 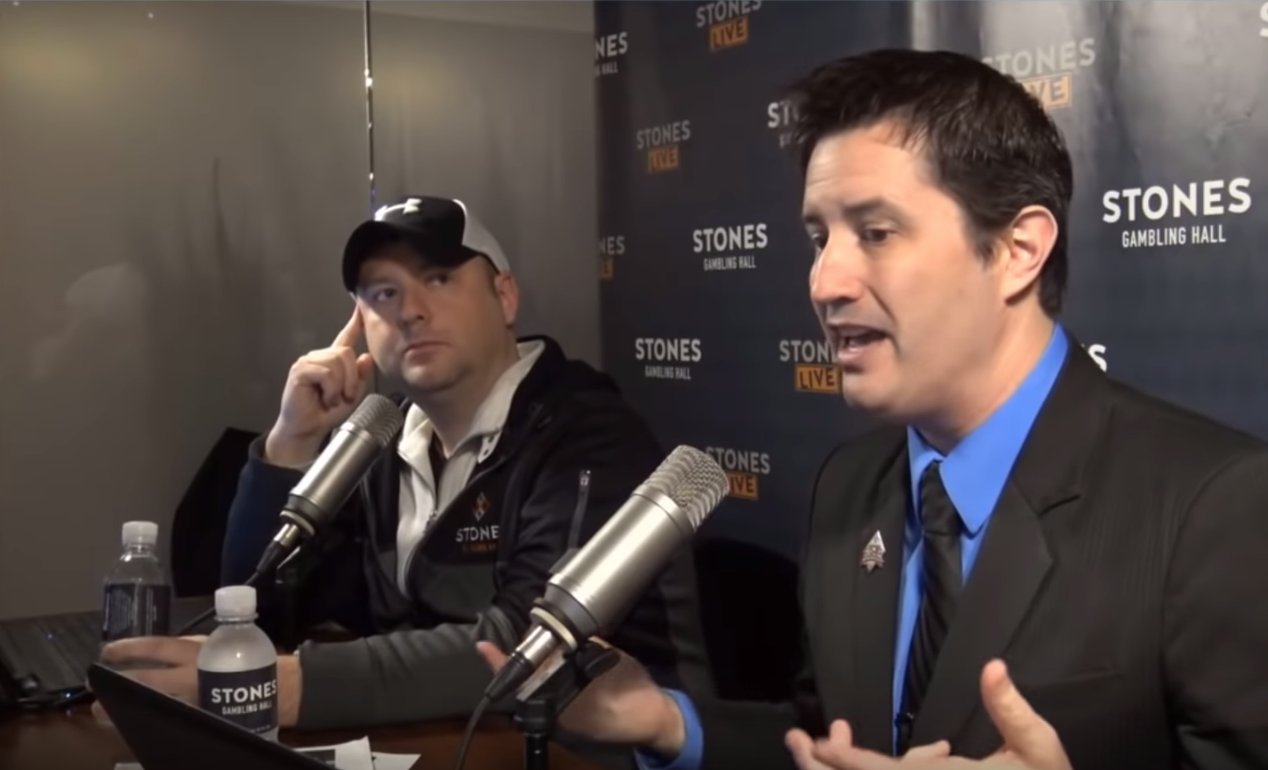 Many believe Mike Postle (left) and Stones TD Justin Kuraitis (right) were in on it together. (Image: YouTube)

Postle is alleged to have used some sort of unknown device to access his opponent’s hole cards during Stones Live streams at Stones Gambling Hall in Citrus Heights, California. Many believe someone on the inside – perhaps a Stones employee – helped. Postle denied the allegations to CardsChat News, and on Mike Matusow’s podcast.

Still, he doesn’t appear to have much support within the poker community.

Postle claims he never cheated. He doesn’t need to, he says. That’s because he is “one of the best” poker players in the world, a statement he made on Matusow’s podcast last weekend.

As new evidence comes out and those who may have been cheated begin their lawsuit against the Northern California poker pro, few remain on his side except the occasional unknown Twitter troll and Matusow, who claims to be “neutral” on this issue, even if his words suggest otherwise.

No offense, Mikey, but when you coddle Postle in the interview and refuse to ask him a hard-hitting follow-up question, you aren’t being neutral. And when you take personal shots at the poker media, calling us “despicable” for accusing Postle of cheating, you most certainly aren’t being neutral.

As for most of the rest of the poker community, that’s a different story. It’s hard to find many poker fans on social media defending Postle. Nearly every big name pro – from Matt Berkey to Scott Seiver – accuse him of being a cheater.

The evidence is too clear. Unless he truly is the best poker player ever, he’s cheating. Postle is likely a solid poker player, with or without getting some illegal help. Chris Moneymaker even vouches for Mike’s talents. It’s just hard to fathom anyone could always be right when facing a decision on the river. And that’s why the poker community, as a whole, is confident he cheated.

What the Poker Community is Saying

Postle’s alleged cheating isn’t good for poker in the long run. Cheating scandals can scare casual poker players away. Who wants to play a game that isn’t legit? But, there is one positive from this potentially damaging story.

Before anyone outside of the Sacramento area knew of Postle, the poker community was almost always divided. We’d argue over the silliest things, whether it be the brand of cards used at the WSOP, or if live reads can beat GTO.

Then, Postle came along, and the poker community unified The list of people who believe he’s a cheater includes Seiver and Berkey, along with Doug Polk, Jonathan Little, Daniel Negreanu, Haralabos Voulgaris, Justin Bonomo, Tony Dunst, and many other big-name pros. The list of high-profile poker pros who proclaim his innocence begins and ends with Mike Matusow. Oh, that’s right, Mikey is “neutral.”

I don’t think he’s cheating at all , I’ve won 54 sessions in a row before! I think he has great instincts and everyone is slandering the guy without anything to go on! https://t.co/hZZjDUsgon

What the fuck is wrong here bets 160 guy behind calls other guy jams by guy flatting behind he thinks he has a draw & other guy jams & his feel is set! In a real poker game when you have good feel it’s pretty easy fold! Gonna need a heck of a lot more proof than this #apostlegate https://t.co/YcMxxwgplS

I honestly dont give a fuck what people say about interview i did with @mike_postle you sick media fucks love to spin stories to fit your narratives, i had seen 2 hands & gave guy a platform to speak allegations put upon him! Accusing me & my gf of being on drugs is despicable!

Definitely being neutral there, Mike. You’re about as neutral on Postle as Sean Hannity is with Donald Trump or MSNBC is with Democrat politicians.

The rest of the poker community, however, isn’t so friendly toward Postle. There aren’t many others who defend the accused Stones Gambling Hall cheater.

The way some of the commentators talk about Postle's actions on stream is very damning.

They do that for no other player ?

For those catching up, a man named Mike P has been playing LIVE POKER on stream and winning at extreme rates, playing every hand not just perfectly, but *beyond* perfectly. He's likely been fed whole cards from someone on the inside. It's approximately 100% that he was cheating

My in depth take on the recent cheating scandal, inspired by @msalsberg pic.twitter.com/2i3VZrFtMF

Did Postle cheat? At this point, given all the evidence we’ve seen, it’s hard to believe he didn’t. And few, other than Matusow, have any doubts left.

The best poker player? Postle must be dreaming, where is he on the GPI , has he ever won any bracelet, he would be broke every single time versus even relatively good low limit online grinders.

Now what will it take to get him to accept? How about getting the stats out of his hand history, already too many hands are there which have proven the wrong doing.

This also means that “Garrett” the proclaimed best player in the world at live at the bike is cheating there is no doubt about it.

It also means that Kings casino live streams are rigged.

Fuk it poker is eigged, just take ur guns out and blow ur fuking brain , u e good for nothing anyway

This scandal certainly has brought the community together, except for Stones, Postle, and of course Matusow. I know this is an article about Postle, but something needs to be said about Matusow. When has Matusow been right about anything? This is the same guy that said, among other ridiculous things, that Trump would make online poker legal in the US within his first year in office, ignoring the fact that Sheldon Adelson has Trump in his back pocket. Matusow might be a great player but has never been the sharpest tool in the shed on other issues. Watch his play, enjoy his poker skill, but otherwise ignore him.