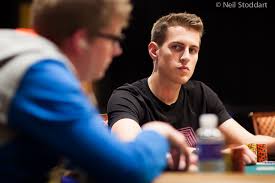 For Mike McDonald, it’s just another win and more money.

Such is life for the man that has over $12 million in lifetime tournament winnings.

McDonald recently added a high roller title to his belt from Pokerstars.com EPT Season 12 in Malta.

At just age 26, the Canadian-born poker star is already one of the top poker players in the world.

McDonald held off a difficult final table in Malta, including defeating the talented Juha Helppi heads-up.

Helppi received a healthy dose of good fortune to finish second. He won a crucial all-in earlier at the final table with pocket fives against pocket kings, spiking a five on the flop.

If not for that lucky two-outer, Helppi would have been crippled. Fortunately, for Helppi, luck was on his side this day.

For Sam Greenwood, luck was on the other side. Greenwood entered the final table as the chip leader but ended up busting in sixth place (€110,590). Helppi ended up busting Greenwood with top two-pair against Greenwood’s bottom pair on the flop. Greenwood was so short-stacked at the time that he was basically forced to make the call.

He was a 2013 WSOP November Nine participant.

Young McDonald had a Farm…of Chips

The EPT Season 12 high roller event final table features a handful of talented pros, but the best of the bunch ended up besting the bunch.

After Helppi spent most of the day on the positive side of the lucky stick, things shifted around once he got heads-up with McDonald.

On the final hand, McDonald limped on the button with king-jack, which convinced Helppi it was a good shoving opportunity with his king-eight. McDonald called and the best hand, amazingly, held up.

Getting the Monkey off his Back

Oddly enough, despite so many deep runs, this was McDonald’s first major live tournament title since the now defunct Epic Poker League Main Event in 2011.

However, 2015 has been a huge year for the Canadian. He has already cashed in eight high roller poker events this year.

His biggest win came in February at the Aussie Millions Poker Championship in Melbourne, Australia. McDonald finished second to the great Phil Ivey, earning $1,235,228 for his efforts.

McDonald got the monkey off his back by winning the EPT12 high roller event, and added a ton of money to his already massive bankroll.