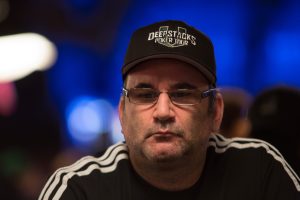 Mike Matusow says the women accusing Donald Trump of sexual assault are liars. But he isn’t afraid to let the world know Bill Clinton is a “rapist,” assuming the former President’s accusers are telling the truth.

The Mouth has been using his mouth, or smartphone, recently to voice his support for Trump’s campaign and to bash Hillary Clinton. More than 10 women have come forward to accuse The Donald of sexual assault.

A leaked video from 2005 shows Trump condoning such behavior, but Matusow is still confident in one thing: Donald Trump hasn’t sexually assaulted women.

“Now they have others supporting them and maybe even money from media to come forward and benefits > costs for them,” Brian Hastings posted on Twitter, directed at Matusow in reference to the alleged sexual assault victims.

“They are all lying period!! Been paid by msm to create narrative,” The Mouth responded, but didn’t mentioned whether or not he was in the room when the alleged criminal acts took place.

Matusow’s argument for how he claims to know the accusers are lying is that they waited until a few weeks before the election to come forward.

He didn’t, however, acknowledge the fact that accusers of Jerry Sandusky and many other convicted sexual predators didn’t come forward until years after the act.

Mike Matusow doesn’t know if the accused victims are telling the truth or not. No one does, except for Donald Trump and the accusers. But some people on his Twitter page suggest he’s being insensitive to sexual assault victims.

In 2002, University of Iowa basketball star Pierre Pierce was accused of raping a member of the women’s basketball team. His coach, Steve Alford, stood up for him, claiming his innocence. Pierce was never convicted and remained on the team after the woman ended up deciding to not press charges.

Three years later, Pierce was arrested for sexually assaulting another woman. This time, he was convicted and sent to prison. Alford was never embraced again by Hawkeye fans after sticking up for his player.

Many in Iowa City are left wondering if the second incident could have been avoided had Alford simply not tried to intervene.

Victim blaming isn’t something exclusive to Alford and Matusow. Katie Hnida was a kicker on the Colorado University football team in 2000 when she alleges a teammate raped her.

She didn’t come forward until four years later at a time when the football program was under scrutiny for creating an excessive drinking and partying culture.

Like Trump’s accusers, Hnida’s timing to come forward was at a questionable time. Why didn’t she speak up years prior? Matusow has suggested Trump’s accusers are liars because they are coming out just weeks before the election.

But what he isn’t acknowledging is that it’s not uncommon for a victim of sexual assault to fear coming forward right away. Sometimes it takes time to gather up the courage. Hnida, in a 2014 interview with the Washington Post, said people still call her a liar.

“I didn’t want to come forward,” she said. “The violation of rape is so severe that your entire sense of self shatters, your agency is taken away, everything is violated.”

Following Matusow’s post accusing the women of lying, one follower had some harsh words for the poker pro.

“Many sexual assault victims wait years to come forward and some never do. Just imagine how they feel when you say this crap,” @larrymcg responded on Twitter.

Mike. You really are an idiot.

How ashamed some of the friends and family of this big mouth must feel. He is obviously too full of himself to understand, and perhaps doesent even care. He sure fits the mold of a trump lover, however.