Mike Matusow wasn’t dubbed “The Mouth” because he was afraid to speak his mind. He got the nickname years ago, by often being the most vocal poker player at any table. And this election season, he’s the most obsessed Donald Trump supporter on Poker Twitter, save for possibly fellow pro Matt Glantz. 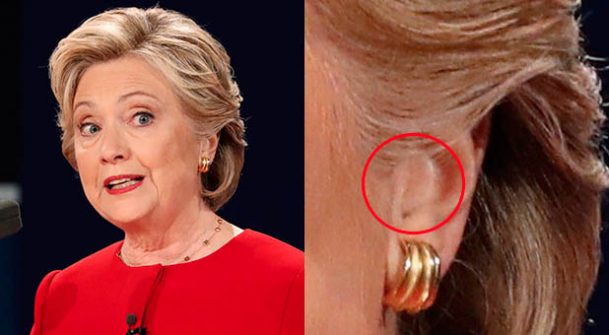 This image from the first presidential debate this week appears to show an earpiece of some kind in Hillary Clinton’s ear. But was it to gain an edge? Mike Matusow thinks so. (Image: Reuters)

Matusow took his support to a new level following Monday’s presidential debate. The World Series of Poker bracelet holder claims that Hillary Clinton, the Democratic nominee, cheated, and that there has been a coverup of this alleged fact. Mike Cernovich, an author, attorney, and documentary filmmaker, as well as another avid Trump backer, fueled the conspiracy theory.

“Curious. Do the poker pros like @themouthmatusow see this as a “signal” to moderator Lester Holt,” Cernovich asked, referring to a video which may or may not indicate Clinton making hand gestures towards the debate moderator.

“Wow ive watched the debates 3 times and never noticed!! I felt the whole time she had the questions but after watching that i she def signals,” Matusow responded (and, no, those aren’t CardsChat typos).

Matusow continued pressing his conspiracy theory that Clinton worked together with Holt to “cheat” during the debate. No one from the Clinton campaign has admitted to Hillary sending signals to the debate moderator, needless to say.

Cernovich then advised his followers that a poker pro agreed with his conspiracy theory. His pro-Trump audience called Hillary a “cheater,” among other less savory epithets. Of course, Cernovich failed to tell his followers that Matusow’s reads aren’t always spot on. For instance, he once folded pocket kings pre-flop to Hellmuth’s 2-7 because he was certain he was up against aces in a High Stakes Poker episode.

A photo from Reuters, which we have shown here, does appear to show some sort of ear device, but whether that was used to improve her hearing or for some more nefarious purpose, we leave up to viewers to determine.

The Mouth isn’t the only poker player who has been vocal during the 2016 election season, needless to say. But he’s arguably Trump’s most avid supporter. In backing the businessman, Matusow has gone so far as to refer to Hillary Clinton as a “murderer” and “liar,” trashed Bill Clinton for his infidelity, and called out the Democratic nominee for being corrupt.

Coming in for the other side is Daniel Negreanu, who is equally vociferous in his support of Mrs. Clinton. And if Matusow felt that Trump won the debate, Kid Poker confidently stated the former secretary of state was the clear winner.

One thing’s for sure: poker pros will continue to bicker heatedly right up until (and most likely long after) election day on November 8, right on the heels of this year’s World Series of Poker November Nine Main Event playoffs. Doyle Brunson and Vanessa Selbst recently went at it on Twitter as well, with some pretty heated exchanges on the political front. Brunson is pro Trump, while Selbst backs Clinton.

Conspiracies, or lack thereof, notwithstanding, Mrs. Clinton continues to lead in many political polls, but not by nearly as wide a margin as she did even a few weeks ago.

Mike still living with his mom?

Probably so, in any way can not reconcile oneself to with victory of Hilary.

I Hope after the Donal get smacked on election day, or if God forgives, he wins after World Ward III Matusow will still support this Maniac, Dumb and Racist Trump.

It only shows how racist and anti ethic is this Poker player is.