For the third time in four years, Mike Leah has won the 2017 Fallsview Poker Classic World Poker Tour $1,100 No-Limit Hold’em Event, which was held in Canada just across the border from Niagara Falls. The run, which includes a rare title defense, has netted the poker pro C$573,334 ($434,644 USD) and captured the attention of the poker world. 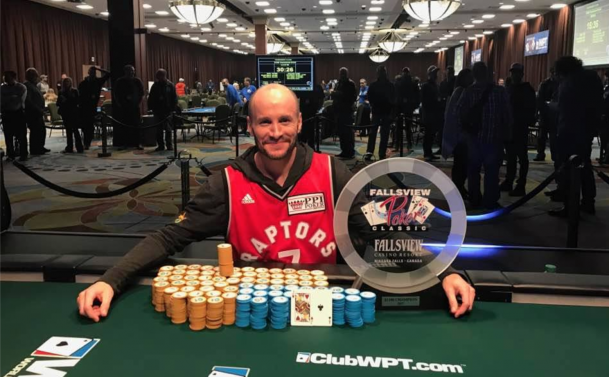 It’s déjà vu all over again for Canada’s Mike Leah, as he poses with the Fallsview $1,100 trophy for the third time in four years. (Image: Fallsview Casino)

Beating Back the Field

However, what separates Leah’s accomplishments from those two have been the sheer sizes of the fields. Ivey did it over combined fields of 87 entries, while the number for Carodenuto was 1,336. Leah had to overcome thousands of players to claim his titles.

CardsChat had the opportunity to speak to Leah the day after his latest win.

CC: Did you actually think you had a chance to win this event yet again?

Leah: It was the goal going in, but it’s definitely a little crazy to have it come through again. Probably more than any other tournament I’ve ever played, I really mentally prepared. I looked back at the last two times I’ve won it and kind of relived the tournament.

I looked at every update I made on Twitter and Facebook, just to try and really get in the mindset that I was going to do it again. I haven’t gone into many tournaments where I go in thinking I’m going to win the tournament, but with this tournament that was my only mindset, so that’s pretty cool.

CC: What did you do to celebrate afterwards?

Leah: I never drink, but a couple of friends persuaded me to have a few last night. It was fun, but it was a rough night and a rough morning. I just came back from the spa and I’m feeling much better now.

CC: What gives you such an ongoing edge in this tournament? How do you do it?

Leah: Just the fact that I’ve won it before, you always want to do well the next time you play it. You have that much more desire to try and do it again.

I’m big on history, accomplishments, and things like that. Bracelets and cashes are important to me, and so is trying to do something that’s never been done before. The extra motivation to try and win the same tournament I’d won twice before was the biggest thing, but it is a $1,000 tournament with over 1,500 people in a place where they only have one tournament a year.

It’s obviously softer than most $1Ks, so that gives you a better chance to do what I did. I think a lot of the players here give me too much respect and let me get away with quite a few things. It was a combination of all of that.

CC: What’s next for you as far as poker is concerned?

Leah: The $5,000 WPT Main Event this week. I’m really focused and motivated to make a run at that. I love playing tournaments in Canada, in my backyard. I’m always more motivated to do well in Canada. We don’t have many tournaments here. It’s a lot of fun. After, I’ll head to California for the three WPTs there before going to Florida.