For the 2016 Mid-States Poker Tour (MSPT), Season 7 proved to be a performance-setting series. It set state records throughout the Midwest, held one of the summer’s biggest events in Las Vegas, and crowned a three-time champ.

Carl Carodenuto made history in November when he won an unprecedented third MSPT title, not to mention a $114,072 first-place prize after topping a field of 490 entrants in the MSPT Golden Gates Casino. 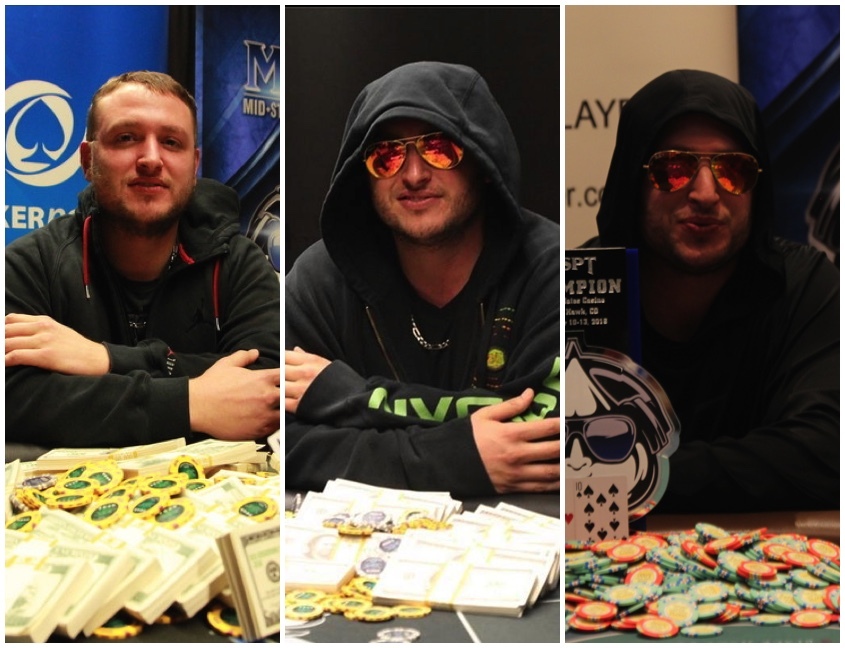 Three-time MSPT champ Carl Carodenuto made four final tables and won Mid-States Poker Tour events three times in the past 13 months. But since one win was in December 2015, his dynamic record couldn’t take him to POY status in 2016. (Image: MSPT)

Before that, Carodenuto had taken down the MSPT Canterbury Park in December of last year, and then successfully defended his title in April (in fields of 470 and 376 entries), a rare feat indeed. All of his victories came in an 11-month period and helped him vault into second on the tour’s all-time money list.

Carodenuto has four MSPT cashes, all of which are final table appearances, and at one point held the lead in the MSPT Season 7 Player of the Year race, but that recognition ultimately went to Rich Alsup.

The largest event in the chronicles of the MSPTtook place this past summer, when an 2,887 entrants turned up for the MSPT Venetian in Las Vegas. That smashed the advertised $2 million guarantee by creating a $2,829,260 prize pool, and saw Belgium’s Thomas Boivin win $352,153, the largest prize ever awarded on the tour. The 26-year-old bested poker pro Mukul Pahuja after the two struck a heads-up deal that promised the latter $300,000.

Given that the event takes place in Vegas during the World Series of Poker, it’s an anomaly, as MSPT fields in their native Midwest aren’t nearly that big. That said, the biggest MSPT event ever outside of Las Vegas took place in May at FireKeepers Casino in Battle Creek, Michigan. It was there Aaron Massey topped a field of 820 entrants to win $174,658.

One of the most interesting aspects of the MSPT is its various State Championships, which it uses via virtue of trademark. For instance, Season 7 kicked off with the Wisconsin State Poker Championship at Ho-Chunk Gaming Wisconsin Dells. That tournament, which drew 489 entries, ended with the longest heads-up match in history, as it took Illinois’ Andy Rubinberg more than four hours to defeat Minnesota pro Kou Vang.

In July, the Iowa State Poker Championship pulled in 451 entrants to Meskwaki Casino in Tama, Iowa. John Sun, a 40-year-old accountant who had finished in third place in the MSPT Potawatomi earlier in the season, came out on top in that tournament to win $104,627 and take a commanding lead in the MSPT Player of the Year Race, although he lost that one to Alsup.

Then the Indiana State Poker Championship at Tropicana Evansville saw 49-year-old Earl Potter beat out a field of 340 to win $82,450, quite a bit more than the $744 in lifetime cashes he had before he played this event.

Finally, Brett Blackwood bested a field of 884 entrants, the largest poker tournament in state history, to win the Michigan State Poker Championship for $188,314.

A Fisherman, But Not a Fish

The MSPT Grand Falls Casino, which took place just outside Sioux Falls, South Dakota, drew 340 entrants and Ted Takasaki, a celebrity in the fishing industry, battled his way through a tough field to win $52,360.

Takasaki, a professional walleye angler and 2010 inductee of the Freshwater Fishing Hall of Fame, was one of the more unique winners in MSPT history, and his victory permeated the fishing world.

Way back in Season One of the MSPT, which was then known as the Minnesota State Poker Tour, Jeremy Dresch won the tour’s second stop and first-ever at Grand Casino Mille Lacs. In September’s MSPT Running Aces, he became the eighth player to win two MSPT titles while tying Everett Carlton for most final tables (8) in tour history. Five months after finishing sixth in the same event, Dresch bested a field of 344 entries to win a career-best $83,045.

Season 8 will kick off with a $350 Regional Event at Potawatomi Casino in Milwaukee, Wisconsin, to run from January 6-8. Find the full schedule for 2017 at msptpoker.com.

Editor’s Note: CardsChat and MSPT have a cross-promotional alliance. Chad Holloway is the Media Director for MSPT.