Microchips And Cards Cause Concern At WSOP 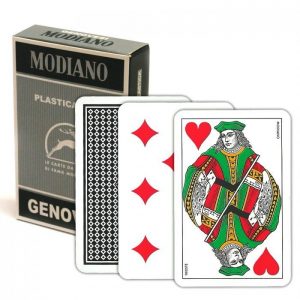 Following allegations of cheating during the recent World Series of Poker (WSOP) $10,000 Heads-Up Championship, a recent discovery has prompted fears that microchips and Smartphones may be creeping into the game.

According to a recent report by Pokernews, a Dutch website called Gambleromania.com has been advertising a card chipping service as well as pre-chipped cards identical to those being used at the WSOP.

At the start of this year’s WSOP, the organizers introduced a new brand of playing cards made by Modiano which are the same as the chipped ones being advertised by a Dutch website.

Although a representative for the website explained that the cards are for entertainment purposes only and not to be used inside a brick and mortar casino, the possibility is there and that has raised a number of security questions.

Fortunately, in order for a cheat to use the cards to their advantage at the WSOP they would need to have the necessary sleight of hand skills to introduce them onto the table without being caught.

This would involve swapping their own hole cards for the chipped ones and then using the microchip to track the movements of said cards.

Another factor working against the player is the rotation of decks during a session. If strict poker, moreover WSOP, guidelines are followed then the dealer should be switching up the deck at regular intervals.

This practice is designed to limit the chances of someone marking certain cards and tracking them for a number of hours.

Although the cards are still for sale on the website and the WSOP’s Executive Director, Ty Stewart, has stated that investigations into the cheating allegations haven’t revealed any marked cards, the question of security is now on everyone’s lips.

New Dynamics a Cause for Concern

With high stakes poker tournaments welcoming an increasing number of seemingly wealthy unknown amateurs, the chances of someone using illicit tactics to gain an advantage have increased dramatically.

While it was once the case that tournaments with buy-ins exceeding $5,000 were played by a recognizable group of players, the modern era has welcomed a slew of new players and, with it, the potential for unscrupulous individuals to infiltrate the games.

At this stage there is no indication that chipped cards from the website or any other source have been used at the 2015 WSOP.

However, the decision to use a new brand of playing card for the Series hasn’t gone down well with a number of players.

Leading the chorus of disapproval was Daniel Negreanu who tweeted his displeasure at having to use the cards.

“Modiano supplied the new cards for the WSOP and are the worst cards I’ve seen since the ones that had Jeffrey Pollack’s name on them,” tweeted Negreanu.

This Twitter rant was followed up by Andy Frankenberger and John Allan Hinds who each had their own problems with the cards, namely that the clubs looked too much like spades and the whole styling was as appealing as stabbing a sword into their heads.

For now it seems as though the new cards are here to stay; however, it’s highly likely players and dealers will be more vigilant when they sit down for a session inside the Rio.

Be aware that the placement of the equipment to read the cards may not be very practical at the WSOP. So, fear of these cards is probably not much of a threat in the real world.

In addition, depending upon which chips are in the cards…when 2 cards are on top of each other, that may also cause read errors….again, I would not worry to much about this at the WSOP.

I would be more concerned about inspecting the table for electronics or be worried if you are being accidently kicked under the table 🙂 …. Oops, the tables are already wired with cameras … and you are not worried about that 🙂 … sigh 🙂