Micon Sought to Buy Lock Poker, According to Seized Documents 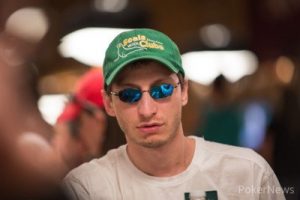 Bryan Micon wanted to buy Lock to “make the players whole,” according to documents found by the Nevada Gaming Control Board. (Image: highstakesdb.com)

Bryan Micon once attempted to buy rogue poker site Lock Poker to “make all the players whole,” according to evidence obtained by the Nevada Control Board following a raid on his home in February.

Micon, founder of the now defunct Bitcoin poker site SealsWithClubs, was charged earlier this week with a single count of operating an unlicensed interactive gaming system and a warrant was issued for his arrest.

When exactly Micon expressed his interest in acquiring Lock is unknown, although estimates suggest it was some time in 2014, at a time when withdrawals from the pariah poker site had more or less completely dried up.

Lock, which finally went offline last week, has owed money to its players since as far back as 2012, with the last recorded successful withdrawal being April 2014.

It continued to accept deposits from unsuspecting customers, however, right up until its recent demise. A thread devoted to the subject on the TwoPlusTwo forums has identified nearly 500 players owed over $3 million, while some commentators believe that the figure owed to players is closer to $15 million.

Micon’s approach to Lock was found in a Skype chat log by investigators. It is addressed to “Jennifer,” presumably Jennifer Larson, Lock Poker, CEO.

“I’m interested in buying the Lock Poker brand and all its software assets,” says Micon. “You can give me a quick google and see that I started SealsWithClubs.eu in 2011 and amassed a considerable wealth with the increase in Bitcoin price. I plan to relaunch the brand and make all players whole. I consider Lock Poker like Chrysler of the early 90’s. It’s a strong brand that needs a turn-around.”

Despite Micon’s claim to have “amassed considerable wealth,” he has launched a crowdfunding to help pay for his legal defense. “The price for representation will quickly deplete my funds,” he tweeted, “and I am asking for donations from anyone who feels like helping me.”

He maintains he is innocent of the charge against him.

Meanwhile, Lock Poker’s demise appears to have been confirmed by the fact that its Curacao gaming license has been revoked, putting an end to speculation that the site may only temporarily be offline.

A search of interactive gaming records in the jurisdiction shows that the license for Lock Poker, as well as that of its sister site Superwins, is now invalid.

If the regulator has finally moved to cancel Lock’s license due to its fraudulent activity, it must be asked what took it so long. With no communication from either Lock Poker or the Curacao regulator, there appears to be little recourse for the victims of the scandal.

Gotta say, I play at SWC and I love the software they use. It is very slick software. Probably my favorite software. I was also introduced to all variations of poker thanks to SWC. Great contribution to the poker comm.

Lol and they get him instead of the lock owners.

Who do you think is worse?