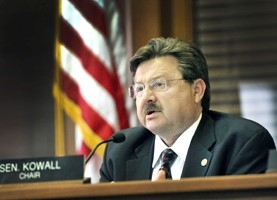 Michigan State Senator Mike Kowall, whose online poker bill will go to a vote on the Senate floor in the next few weeks. (Image: miana.org)

Hope for online poker in Michigan, where State Senator Mike Kowall’s (R-White Lake) SB 889 was passed by the Regulatory Reform Committee by a vote of 8-1. Next stop, Senate floor.

Kowall has said he is “confident” that the bill will pass this year, but it needs to get its skates on; the current legislative session ends at the end of this month.

Things may bode well in the Senate, where Kowall is the majority floor leader but there is currently no companion bill in the House, or for that matter, much talk of authorizing and regulating online poker.

Another possible impediment may be that as, Michigan Gaming Control Board deputy director David Murley, said recently, gambling expansion may require an amendment to the state constitution, which means the bill would require a public referendum.

Murley has also said that the bill’s stated openness towards interstate and international liquidity sharing “raises significant legal and policy questions” that would “need to be carefully considered.”

There are also tribal gaming issues. For the tribes to participate legally in the market they may have to waive their sovereign immunity. That’s not likely to be a palatable proposition, so they may instead claim online poker legalization is a violation of their gaming compacts, which could lead to them withholding rev-share payments to the state.

While it has been reported that the bill passed committee this week with as yet unpublished amendments, the language of the bill in its last known form was pretty good. As well as the scope for player pool sharing, the bill contained no bad actor clauses and sets a reasonable tax rate of 10 percent. Michigan’s poker players will be hoping that the House suddenly catch the poker bug over the next few weeks.

New York State Senator John Bonacic has announced that his Committee on Racing, Gaming and Wagering had thrashed out an “agreed-upon” bill that would regulate DFS. The bill still needs to be approved by the Senate and House, but Bonacic said that he was hopeful that regulated DFS would soon be a reality.

Bonacic is also the sponsor of New York’s online poker bill, which has made progress in the legislature this year, and which the Senator described in an interview with TWC News as having “better odds” of passing than DFS.