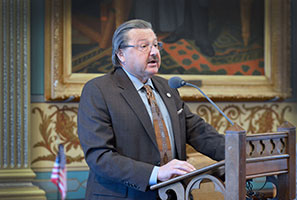 Michigan State Senator Mike Kowall is confident about his online poker bill SB 889 becoming law. But there may be impediments. (Image: senatormikekowell.com)

Michigan’s online poker bill (SB 889) is expected to pass this year, at least according to the office of its sponsor, State Senator Mike Kowall (R-White Lake).

Dave Biswas, Kowall’s chief of staff and legislative director, told CardPlayer this week that he “saw no reason” why the bill would not go through in 2016.

State-by-state regulation of online poker has failed to materialize as had once been hoped. Nevada, New Jersey, and Delaware got the ball rolling in 2013, but then the ball just stopped dead, hampered by failed legislative efforts in California, Pennsylvania, and other states.

Michigan recently, and quite suddenly, supplanted Pennsylvania as “state most likely to” pass Internet poker legislation. But according to Biswas, it’s now the state very likely to.

Biswas said that following the Senate hearing for Kowall’s bill earlier in the month, the legislation would go through a couple of technical amendments. After that there will be another hearing, in all likelihood within the next few weeks. Then the bill will be passed to the State Senate floor and from there to the House.

It seems so simple, and as a news outlet that has covered online poker legislation assiduously over the years, perhaps too good to be true. So let’s unleash some precipitation on this parade.

One possible impediment, which was brought up at the recent hearing by Michigan Gaming Control Board Deputy Director David Murley, is that the bill may violate the state constitution, which requires that gambling expansion is decided by public ballot. This is not an insurmountable hurdle, of course, provided online poker is what the public wants, but it will certainly delay matters.

It’s also possible that one of the bill’s key strengths could be one of its weaknesses as well. SB 889 states that “a wager may be accepted from an individual who is not physically present in this state … including any foreign nation.”

This opens up exciting possibilities for interstate and international pool sharing. But according to Murley, it also “raises significant legal and policy questions” that would “need to be carefully considered,” which at the very least implies that the path to regulation is not as clear as Biswas suggests.

There are key issues surrounding tribal operators, too. The tribes were unhappy about the creation of Michigan’s online lottery, and the opportunity to participate in an online casino and poker market might serve as compensation. It could also mean that they would have to waive their sovereign immunity, as they would be offering gambling beyond their tribal borders, a factor that might prove problematic.

Moreover, the tribes could take the opposing tack and claim the authorization of non-tribal online poker and casino gaming is a violation of their gaming compacts, which could lead to them withholding revenue share payments to the state, as well as tying up arguments in court.

Despite all this, Murley said he believes Michigan can regulate online gaming and that it can “do it well.” Whether that happens this year, next year, or sometime within the next decade, will be evident when all the cards are turned up.

Good for Michigan. How about Florida?