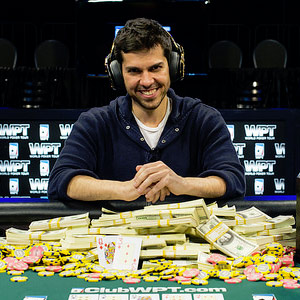 The World Poker Tour stops at Borgata are usually some of the biggest in the tour’s history. The WPT Borgata Poker Open Main Event that just concluded in Atlantic City, New Jersey set a record as the second-largest in 12 seasons of the World Poker Tour, just behind another Borgata tournament. And Anthony Merulla will go down in the history books as the player who won it.

The WPT Borgata Poker Open Main Event was a $3,500 buy-in tournament with a $3 million guarantee. There were also reentries allowed for players. The first day of play saw a total of 422 entries, with another 807 added on the second starting day. The total of entries added up to 1,229, which pushed the prize pool past $3.9 million.

Day 2 commenced with 642 remaining players from Days 1A and 1B, with Lazaro Hernandez as chip leader when the action started. Play continued for the designated number of levels and 188 players were able to bag their chips. Hernandez was again the chip leader, that time with 753K chips, and Robert Merulla was in the top quarter of the counts with a solid 254K chip stack.

Aiming for the Final Table

Day 3 moved forward until the money bubble burst when Dale Jamison exited in 121st place, courtesy of Hernandez. Some of the bigger names who cashed that day included Andy Frankenberger, Matt Affleck, Isaac Baron, and Hernandez himself. Play stopped with 36 players still in contention. Farid Jattin topped the leaderboard with 3,818,000 chips, followed by Jared Jaffee with 2.34 million and Merulla in third with 2.15 million chips.

The plan for Day 4 was to play to the final six, and they did just that. Players like Joe Serock, John D’Agostino, Chad Brown, and Faraz Jaka exited along the way. Tyler Patterson and Chris Reslock departed late in the night. On the final table bubble with seven players left, Merulla was one of the short stacks but managed to double through Jattin to stay in action. Two hands after that, Anthony Maio eliminated Kunal Patel in seventh place, which was worth $135,172.

The final table was set for January 31 with these players and their chip counts:

It could be said that Merulla started his upward trend on the 11th hand of the final table. He pushed with queens, Jattin was all-in with kings and Jaffee had them both covered but only had pocket tens. The board brought four diamonds which paired with the one in Merulla’s hand; he completed his flush and collected about 10 million chips. Jattin was out in sixth. Two hands later, Paredes eliminated Mezheritsky in fifth place. Another two hands after that, Merulla busted Jaffee in fourth.

Paredes was the clear chip leader going into three-handed play, though Merulla was in second and Maio was on the short stack. The three played for more than 50 hands before Maio took a shot with pocket queens on a 7-5-2 board. Maio had one diamond to match the all-diamond board, but Merulla was there with A-6 of diamonds for the nut flush. Maio was gone in third place.

Heads-up play began with Paredes holding 20.5 million chips to the 16,175,000 of Merulla. On the 100th hand of the night, Merulla had dipped to near 14 million while Paredes had climbed to 22.6 million. The latter continued to climb but Merulla did double through on the 124th hand to take the lead. Paredes mounted a solid comeback, though, and regained the lead over the next few rounds of play. Merulla won a pot worth nearly 20 million chips soon after to retake the lead, but Paredes quickly doubled through to climb back to 16 million.

Even so, Merulla kept the late-night momentum going. On the 171st hand of the final table, Paredes pushed all-in with Qs-8c on a Qc-6c-3s flop. Merulla called with Qd-3d for two pair, which held up to the 7d turn and 4d river. Paredes took second place.