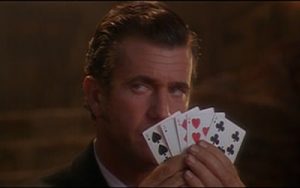 Mel Gibson will be one of the A-list Hollywood stars showing off their poker skills at the WPT’s latest charity event. (Image: themoviescene.co.uk)

Mel Gibson and Vince Vaughn will help the World Poker Tour (WPT) Foundation raise some more money for those in need when they ante-up in a special poker event.

Dubbed the “WPT Foundation™ Presents Four Kings & An Ace Charity Poker Tournament,” the event will see some of the leading celebrities in the world show off their poker skills inside CITIZEN Beverly Hills.

As ever, a handful of seasoned poker pros will line up alongside the likes of Gibson, Vaughn and a host of donors which should make for some interesting action when the cards start to fly on October 21.

Doing It for the Kids

Benefitting from the evening of fun and frolics will be Mending Kids, a charitable organization that provides live-saving surgery for children around the world.

Based in Burbank, California, Mending Kids has helped fund surgeries and educate medical staff in 57 countries, including the US, Bolivia, India Peru and Cambodia.

The WPT Foundation’s latest event will see all the money raised from an evening of poker donated to the organization. In the interest of raising as much money as possible, the WPT is giving poker fans a chance to be a part of the action.

For $10,000, a limited number of players can buy entry into the tournament and sit down with the likes of Gibson, Vaughn, Erik Seidel and Scotty Nguyen. In addition to those at the felt, WPT host and commentator Mike Sexton will be on hand to add some TV-shine to the event, while reporter Lynn Gilmartin will be talking to those involved throughout the event.

In addition to the charity poker tournament, the event will offer attendees an evening of casino gaming as well as a silent auction.

Instead of having people bid on lots using a combination of hand gestures and calls, a silent auction gets participants to write their bid on a piece of paper.

After sealing their offer, bidders must wait until the auction is “closed” before they find out whether they offered more than their peers.

Anyone interested in joining the tournament can register via the WPT Foundation’s official website. Alternatively, anyone wishing to watch from the rail can also buy a ticket to gain access to CITIZEN.

About the WPT Foundation

The WPT Foundation is a non-profit organization that hosts a series of events that contribute towards its goal of “Playing for a Better World.” Prior to 2012, the WPT was heavily involved in the charity sector, but the Foundation was set up as a way to consolidate its efforts. With the new initiative in place, the WPT Foundation then partnered with Charity Buzz to offer a platform where chosen charities can offer year-round auctions that act as a complement to the organization’s live events.

A well done WTP charitable hosted event with the Star Studded Starz & all the benefits benefiting the Mend Kids Organization which is worthy cause to all other charitable Organizations & events….

Good news of Mel, are an eleemosynary poker it too poker, that really will help children and will give an opportunity to visit to the players in an unforgettable atmosphere.