In the new book Gardena Poker Clubs: A High-stakes History, set to release on June 9, author Max Votolato reveals the high stakes stories behind Gardena’s famous poker rooms. The book is a spinoff to his 2015 documentary film “Freeway City.” 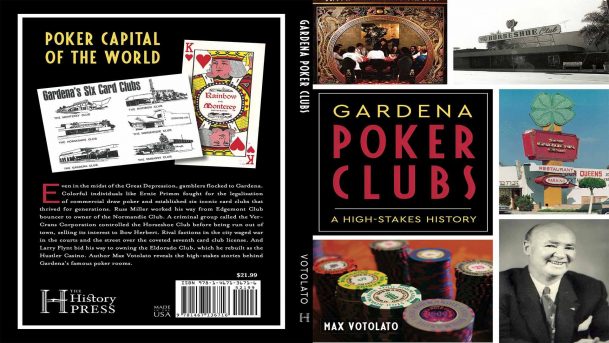 Originally from South London, Votolato studied film at London College of Communications in England. A decade and a half ago, he relocated to Los Angeles and has spent his career working on films and television shows.

In November 2015, he introduced himself to the poker world after  producing and directing the feature-length documentary “Freeway City,” which explored the history cardrooms in Gardena, California.

The 90-minute film told the story of Ernie Primm, the man who found a legal loophole allowing him to establish poker outside the Los Angeles city limits. Votolato spent years researching for the film, which included sifting through decades of old newspapers, viewing old film clips, and interviewing the power players in Gardena poker, including Hustler publisher Larry Flynt.

Votolato was able to dig up never-before-seen photos and footage, which he shared in the documentary. The film, which is free to view online, also featured an original soundtrack by Grammy Award nominated artist Brian O’Neal.

CardsChat had the opportunity to speak to Votolato about his upcoming book.

CC: What inspired you to write Gardena Poker Clubs? Was writing a book always the plan after the documentary?

Votolato: I wanted to do a follow up to “Freeway City” and explore the world of the card clubs. I’d collected so much great material on the card clubs while I was making the documentary and it didn’t all fit into the film. I knew there was enough there to do another project, but my initial thought was that it would be a film.

CC: You went with a publisher as opposed to self-publishing for Gardena Poker Clubs. What was your thought process in determining the best publishing route for you?

Votolato: About a year after the release of “Freeway City” I was approached by the publisher History Press and asked if I would be interested in writing a book about Gardena. I was asked to pitch a book idea about Gardena and I just knew it had to be about poker and the story of the card clubs.

CC: What sort of things can people expect to read about in your book?

Votolato: People have written about the subject before but never truly connected all the dots. The original clubs are all gone and now. The sale of the Normandie Casino to Larry Flynt last summer marks the end of an era and coincides with the ending of my book. The book’s historical timeline runs right up to present day.

It took lots of interviews and months of exploring old newspapers, periodicals and legal documents to piece together the stories and timeline. I had to go through decades of old newspapers on microfilm to dig out little details about the clubs.

I traced Ernie Primm, Frankie Martin and Russ Miller back to the early 1930’s –when they operated an illegal casino called the Edgemont Club above a coffin factory in downtown Los Angeles. This was before their eventual retreat 13-miles south to Gardena once the jaws of citywide reform started to threaten all the illegal clubs, or “speaks”, that were dotted around L.A.

A lot of the headlines were sensationalist, especially in terms of the anti-gambling sentiment that was prevalent beginning in the mid-1930’s with police raids on gambling spots in Gardena and other cities. There was a strong moral crusade against the clubs organized by local religious leaders and concerned citizens. In the 1940’s newspaper stories about the evils and perils of gambling were prevalent. Stories like the gambling addicted grandma who cashed bum checks to play poker and a young mother forced to take a sanity test after she let her baby starve to death while she played poker in a Gardena card club.

There were also many notable players. In the 1970’s Horseshoe Club regulars included John Holmes, the famous porn star, Ruth Handler, president of the toy company Mattel and the inventor of the Barbie Doll, and Bill Roberts who ran Ronald Reagan’s political campaigns for Governor and President. One night the actor Gabe Kaplan who starred as the teacher on the sitcom “Welcome Back, Kotter” came in and tried to cash a $10,000 check but the cashier turned him away for not having his credentials on file. He went over to the Eldorado Club where they cashed his check and became a regular there.

CC: Does your book have anything unique as far as interviews, access, etc.? For example, I remember you spoke to Larry Flynt in the documentary. Not everyone can just get an interview with someone like him.

Votolato: One of the interesting things from my interview with Larry Flynt was his explanation of how the opening of his Hustler Casino in 2000 coincided with the advent of online poker games and celebrity poker on television. He was able to harness this new, young, hip crowd of poker players and make them his clientele. The city of Gardena originally didn’t want Flynt to call it The Hustler Casino. They wanted it to be “The New Eldorado Club” but the Hustler name brand is such a big draw and so the rest is history.

The Gardena Poker Clubs book also features interviews and photos from Blaine Nicholson, Ernie Primm’s former public relations executive who later represented the Normandie Casino for marketing and public relations. And an interview with Tom Parks, who worked as a public relations director for the Horseshoe and Gardena Clubs and later was elected general partner at the Rainbow Club.

CC: When and how can poker fans get a copy of your book? Will there be an e-book/Kindle version?

Votolato: The book release date is June 19th 2017 and will be available in paperback and e-book through History Press.