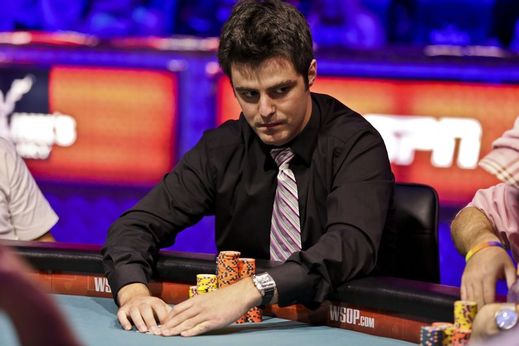 Max Steinberg is set to compete in the 2015 World Series of Poker Main Event final table as one of the November Nine at the Rio in Las Vegas, kicking off November 8th.(Image: www.CardPlayer.com)

Max Steinberg, of all the November Nine, may have the most stellar poker resume. One that outshines most of his competitors, in terms of tournament cashes at least, at the WSOP Main Event final table this year.

That includes a bracelet in 2012 (for a $1,000 NLH event, in which he took home $440,000) and just under $3 million in live tournament winnings overall. (Only Pierre Neuville, who is  more than twice Steinberg’s age, has the Californian beat for overall tournament winnings, with $3.1 million in total cashes).

Steinberg belongs in the poker spotlight, but ironically, he’s now officially moved on to another career. Even more ironically, it’s one that is now at complete odds with the World Series of Poker.

“The funny thing is that I basically quit poker two months ago,” Steinberg told PokerListings. “I started to do daily fantasy [sports] for a living, so. I haven’t dreamed about it (November Nine) lately,”he said after his making the galaxy of nine that will appear on ESPN come this Sunday.

He won’t be doing that while he plays out the WSOP final table though. DraftKings, a major sponsor of WSOP last summer, has now cut ties with the poker event following Nevada’s recent ruling that DFS is illegal in the Silver State (as they have decided it is more luck than skill, and thus, officially “gambling”). In fact, the DraftKings logo will be completely absent on the November Nine broadcast.

Steinberg isn’t alone in his transition to DFS. Many poker players have switched over to daily fantasy sports due to what were the industry’s liberal restrictions compared to poker (or did before the recent changes in Nevada, and crackdowns by the FBI and the New York Attorney’s office). The Golden Boy from California saw greener pastures and despite reaching the final table, hasn’t looked back.

Whether or not he sticks with playing daily fantasy sports given the current legal and regulatory climate remains to be seen. If he doesn’t, he will always have a successful career in poker waiting for him.

As far as Steinberg’s poker career, he certainly has accomplished quite a bit in a short time period. The Oakland, California resident has 10 WSOP cashes to his credit since 2010, a bracelet, and runner-up finishes in WSOP and WPT events.

At just 27 years old, he’s still the senior to all but three fellow November Niners. Youth, of course, has been a common thread among the Main Event winners in recent years. Peter Eastgate (2008), Joe Cada (2009), Jonathan Duhamel (2010), Pius Heinz (2011), Greg Merson (2012), and Ryan Riess (2013) all claimed the coveted gold bracelet prior to the age of 24. With two 60+ contenders and one late 30-something, Steinberg still falls close enough to the young gun category, though.

What Steinberg has going for him compared to some of his opponents is experience, skill, and an ability to close. He’s the only player at the final table that has a WSOP bracelet and only 72-year old Pierre Neuville has more career live tournament winnings, and that’s just by a nose.

Conquering three more grueling days of play to claim the bracelet won’t be easy. Steinberg is 5th in chips (20,200,000). Arguably the toughest opponent at the table, Joe McKeehen, has a massive chip lead (63,100,000).

McKeehen is an aggressive player and Steinberg will have to deal with him to his left. Steinberg drew seat #4, McKeehen will be in seat #7. Having an aggressive, skilled chip leader to a player’s left is a significant disadvantage, but no other table mate is more likely to beat the odds.

Poker in His Blood

By age 17, Steinberg was already focused on becoming a professional poker player. He started out playing online, reportedly with his dad’s money, testing his luck in low-limit SNG’s. Steinberg would make a quick rise from $5 SNG’s to finishing second in a $2700 buy-in Latin American Poker Tour Event in Costa Rica at age 19.

Poker was a family favorite in the Steinberg household. His twin brother Danny began playing at the same age when their father, Rob, deposited $50 into an online poker account for them as a 17th birthday present. The rest is history.

(And yes, we noticed that was underage too, but this was 10 years ago, and times were different).