Back in April, Maurice Hawkins became the first player in World Series of Poker Circuit history to win back-to-back Main Events. Last weekend, he once again made history in his hometown of West Palm Beach, Florida when he topped a field of 261 entrants to win the WSOP Circuit Palm Beach Kennel Club Main Event for $95,921, his third Main Event title in 2016, and his eighth overall gold ring. 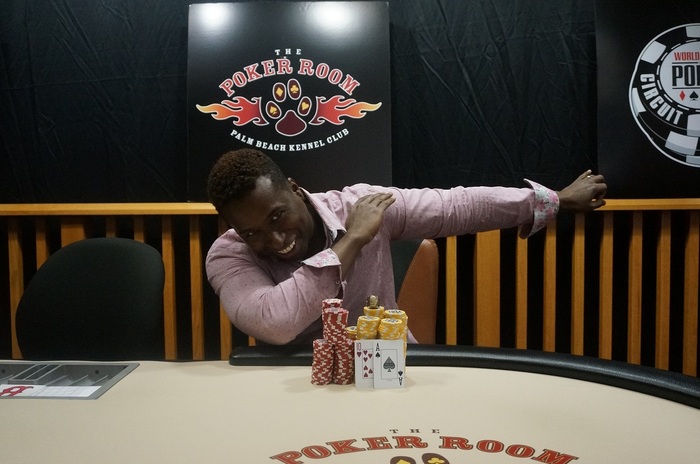 Putting His Accomplishment in Perspective

Along with Blair Hinkle and Chris Ferguson, Hawkins is now one of only three players to win three WSOP Circuit Main Event titles. However, while it took Ferguson two and a half years to win his titles, and Hinkle four years, it’s only taken Hawkins eight months.

The win marked Hawkins’ fourth ring of the year, but the first of the new season, which began after the 2016 World Series of Poker in Las Vegas. In addition, the prize money pushed Hawkins’ career Circuit earnings to $1,011,946, making him only the second player (Ferguson was the first to do it) in Circuit history to reach seven-figure territory.

Finally, the win awarded Hawkins a seat into the Global Casino Championship for the second straight year. Remember, all WSOP Circuit Main Event earn a seat into the $1 million guaranteed bracelet event.

Matt Wright and T.J. Shulman Among Other Big Winners

Over the course of the WSOP Circuit PBKC’s dozen ring events, no player did better than Matthew Wright, who earned the title Casino Champion. Wright cashed four times and final tabled three events, including a win in Event #1 $365 No-Limit Hold’em Monster Stack for $22,705. For his performance, Wright was also awarded a seat into the season-ending 2017 WSOP Global Casino Championship.

Another player to do quite well was T.J. Shulman, who won his first gold ring by taking down Event #8 $580 Double Stack NLHE for $25,092. He then went on to final table the Main Event, ultimately finishing in seventh place for $13,973.

Here’s a look at all those who won rings at the latest WSOP Circuit PBKC:

The WSOP Circuit’s current stop kicked off on Thanksgiving and will run through December 5 at Harrah’s Cherokee in North Carolina.