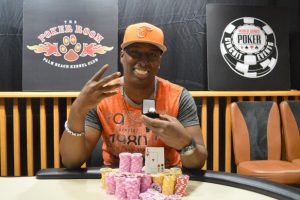 Maurice Hawkins has accomplished what the Golden State Warriors are attempting to do right now but in a different game. Earlier this month, Hawkins won the $1,675 buy-in Main Event at the Council Bluffs, Iowa World Series of Poker Circuit stop.

The win earned him $113,152. But he wasn’t done dominating the Circuit world. His next stop was Cherokee, North Carolina, for another Circuit Main Event. Hawkins has gone back-to-back, winning his second consecutive Main Event and seventh career Circuit Ring.

Following his big win in North Carolina, Hawkins now has surpassed the $2 million lifetime live tournament winnings mark. He now ranks 27th in Florida history but has more than $14 million to go to catch the leader, Jason Mercier.

More than half of his career tournament winnings have come in WSOP and WSOP Circuit events. His win in Cherokee was the biggest score of his career, barely surpassing the $220,000 he won this past September in a WPT event at Borgata in Atlantic City, New Jersey. He came up just short (4th) in his quest to win his first WPT title.

But he’s also had some success in World Series of Poker tournaments in Las Vegas. The back-to-back champ has an impressive 16 WSOP career cashes for a total of $907,470 but does not have a gold bracelet. Yet.

Hawkins, albeit incredibly skilled at poker, didn’t originally set out to play the game for a living. He has a degree in biology with a minor in chemistry and spent time in college attempting to become a doctor.

But poker clearly is his true calling. With more than $2 million in tournament winnings numerous deep runs in major tournaments, it would be difficult for most doctors to make the kind of money he does at his current “job”.

Following his recent Circuit title, Hawkins took to Twitter to express some excitement, as is to be expected.

“It was so nice I had to do it TWICE. Back to back CIRCUIT MAIN TITLES for THE HAWK,” he said in the third person.