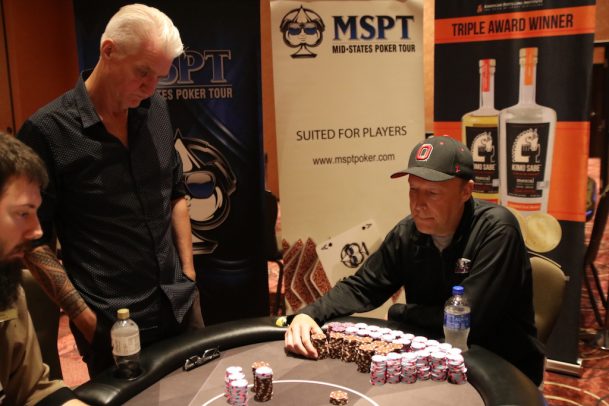 In the final hand of the tournament, which was the first after the heads-up deal, Matthew Vignali (right) defeated Alexander Hill. The litigation attorney is now more than $70K richer. (Image: MSPT)

It was the first five-figure win for the lawyer, who practices primarily civil and commercial litigation, as well as construction and contract law, and was good for $70,240 after striking a deal with runner-up Alexander Hill.

It marked the second time this year that the MSPT set a state record in Wisconsin. Back in January, the MSPT Regional Event drew 1,228 entries, which at the time set a new bar. That tournament was won by Craig Trost for $63,252.

But only one month later, the World Series of Poker Circuit Potawatomi Casino Event #1: $365 No-Limit Hold’em Re-Entry beat that with 1,272 entries over four flights.

Dead in the Water

When heads-up play began, Vignali, who had fired two bullets into the tournament, held 27 million to Hill’s 6 million. Hill managed to close the gap and pull close to even, at which point the opponents opted to secure $60,000 each and leave the trophy and $10,240 in prize money on the table.

In the first hand after the deal was struck, Vignali jammed the button holding the A♦9♥ and Hill ended up calling off with the inferior K♦9♦. The board ran out 10♣A♠8♣8♠J♣, which left Hill drawing dead after the turn.

“I’m pretty exhausted but very excited,” said Vignali, whose prior best cash was just $1,299. “ … I don’t travel the circuit or anything … [but] I always play in the MSPT and WSOP Circuit when they come to Milwaukee. ”

The final table began with Michael Berry holding an eight-figure stack of 10.5 million, while his next closest competitor in Vignali had less than half that.

“When I got to the final table I felt pretty relaxed and pretty good,” said Vignali. “Things had been swinging my way and I felt like I’d been playing real good all tournament, not making many mistakes. I felt pretty confident actually.”

The fan favorite at the final table seemed to be Joan Sandoval, the last woman standing in the tournament. She was hoping to become the first woman to capture a MSPT Regional Event title, but she came up short, finishing in sixth place.