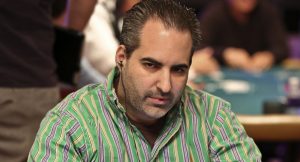 Matt Glantz has never been shy about sharing his opinions on how things could be improved in the game of poker, including at the World Series of Poker.

That outspoken nature seemed to be a little too much for one WSOP official to handle, though there’s no need to panic: it seems that all has returned to normal in poker’s social media landscape, at least for the time being.

Glantz found himself blocked by WSOP Tournament Director Jack Effel for a short period of time this week following another round of suggestions over how some of the problems at this year’s WSOP could have been prevented.

Glantz had suggested that a Players’ Committee could help spot these issues before the World Series starts, removing the need for quick fixes during the tournament.

Glantz Critical of WSOP Since June

But to truly understand the situation, we need to go back to early during the WSOP, when Glantz first aired his criticisms.

In mid-June, Glantz wrote a piece for BLUFF in which he argued that “the WSOP is losing its luster.” Glantz pointed to many of the same issues that were talked about all summer: the quality of the cards being used, the structures on low buy-in limit events, and the change in media policies that led to the WSOP handling live updates themselves.

“I can honestly say this is the first summer I have ever had the thought that I might not come back next year,” Glantz said in his piece. “I might actually skip the WSOP. When talking about it with my peers, I am hearing similar thoughts across the board.”

Glantz then suggested a players’ panel to help the WSOP figure out the best way to run the series and make changes from year to year.

It was a suggestion he once again made in a tweet he published on Monday.

Glantz’s tweet suggested that had such a committee been in place for this year, players would have discouraged the use of new cards, the large pay jump from 11th to 10th place in the Main Event, and the removal of a 3rd party media company for live coverage. He also noted that players would recommend working with ESPN to allow live streaming coverage of the Main Event, calling the lack of such a stream “a huge mistake” in the current poker landscape.

And not long after that tweet, Glantz reported that Effel had not taken kindly to his comments.

“Seems like an appropriate response to fair criticism,” Glantz tweeted along with a picture showing he had been blocked by @WSOPTD. “Oh well. Guess I’m done guys.”

But the block didn’t last for too long. By Tuesday night, Effel had not only unblocked Glantz, but also issued an apology to what seemed to be a number of critical players he had blocked recently.

“I regret blocking any1 & apologize 4 offending U,” Effel tweeted. “Always been a man of the people but respectfully ask that comments be made in good tone TY.”

The WSOP has had a history of issues on Twitter. These go back to at least 2012, when the WSOP’s official account retweeted a tweet from Shawn Daniels attacking Jonathan Aguiar, something that put the WSOP’s social media professionalism into question.

I guess Jack Effel lost his cool after getting needled ! that’s something even beginning poker players quickly learn to overcome .