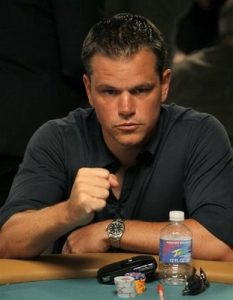 Matt Damon tells Rich Eisen that a story for Rounders 2 is currently in the works and he’s interested. (Image: ultimatepokerinfo.com)

Matt Damon is ready and willing to reprise his Rounders’ role and it seems the two writers behind the movie are also plotting a sequel.

Talking to Rich Eisen earlier this week, Damon  explained that he still holds a soft spot for Rounders and he’d be interested in seeing how his character, Mike McDermott, would interact with the poker world as it is today.

When Damon portrayed the canny McDermott back in 1998, poker was a vastly different industry than it is today.

Online poker was but a tinkle in the eyes of some forward-thinking software developers and most games either took place in a casino or in underground clubs.

A Different Story to Tell

Today, however, poker is a mainstream activity that people can play live, online or via their mobiles. In fact, according to some, Rounders was one of the catalysts for the poker boom at the turn of the millennium.

Since playing the lead in Rounders, Damon has kept close ties with the poker world and often been seen at events such as the WSOP.

Knowing the current state of play, Damon said that he would be interested to see how McDermott would fair in the online arena.

“This young generation, they start playing when they’re in their adolescence. They’re looking at 10 hands at a time, playing for real money online. By the time they’re 21, they’ve seen millions and millions and millions of hands…It’s now gone into deep game theory. It’s at a whole other level. It’s just a very, very different game,” said Damon.

It Would be Fun

Talk of a sequel to Rounders is nothing new, but Damon’s assertion that writers Brian Koppelman and David Levien already have a story in mind is certainly a sign that something could be in the works.

While the writing duo’s recent poker movie, Runner Runner, wasn’t as much of a hit as Rounders, it certainly wasn’t as bad as some of the other poker-themed movies from the last decade.

However, it’s often said that sequels are never as good as the original, so a second roll of the dice could run the risk of tarnishing memories of the original.

Regardless of how the movie performed in theaters, Damon admitted that he “couldn’t have had more fun” making the original which may be enough of a reason for him to sign on the dotted line in the near future.

I LOVE ROUNDERS! That is interesting, thanks for sharing!

I look forward to hearing more about this on Jimmy Kimmel…oh wait.