Maryland casinos have four poker rooms and 124 tables. Collectively they raked more than $3.7 million for the month of April. That’s nearly a 24 percent increase compared to April 2016, which harkens back to a time when there were only three poker rooms generating revenue in the state. 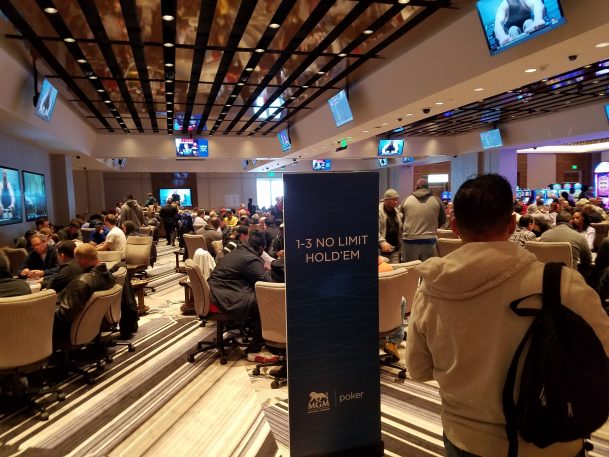 Since opening in December, the MGM National Harbor has stayed full and has led the state in poker revenues. (Image: PokerChipForum)

Monthly revenue reports released by regulators confirm that Maryland is a current poker hot spot. Strong numbers suggest that the December opening of MGM National Harbor, located about 11 miles south of Washington DC, has helped energize the area poker scene, and has not cannibalized it. Though its presence has challenged the supremacy of Maryland Live, previously the state’s top poker destination.

The larger, 52-table Maryland Live casino poker room has seen its revenues decline since MGM opened, but it still raked in $1.4 million.

One apparent strength of the Maryland poker scene is how each room can serve distinct areas and draw players from multiple states.

The Hollywood Casino Perryville in the northeast attracts customers from Delaware and Pennsylvania. Horseshoe Casino is in Baltimore proper and draws players primarily from the large metropolitan city with a population of more than 621,000.

While Maryland Live has done well since it opened and first brought poker to the state in 2013, MGM National Harbor has been extremely popular en route to profitability. The place has been tops in revenue since it opened, and waiting lists for a seat have reached more than 100 players during peak times.

Perhaps in anticipation of competition from MGM, Maryland Live began construction on a 17-story, $200 million hotel tower in September, with an expected opening in early 2018.

How do they have ANY tables if they are raping the players at that rate? 3,700,000 in 1 month for 123 tables in addition to the tips the dealers feel it is there job to shame the players into paying. Poker is KENO … sad.