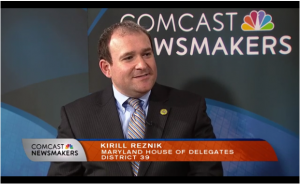 A Maryland poker bill to legalize home games, proposed by Delegate Kirill Reznik (D-Montgomery) above, has passed through the State House and is on to the Senate for a vote.   (Image:  reznikformaryland.com)

A Maryland poker bill took a giant leap towards legalizing home games in the state, but with some stipulations. House Bill 127 was introduced earlier this year and has now passed through the State House with a unanimous vote (139-0).

The bill, sponsored by Delegate Kirill Reznik (D-Montgomery), will now be sent on to the State Senate in the form of a companion bill. Home poker games are actually deemed illegal in Maryland. Violators can face up to a year in prison and a $1,000 fine, although the odds of receiving such punishment are less likely than flopping a royal flush.

Lawmakers avoided the bill in 2014 due to some new commercial casinos opening up around the state. Passing such legislation at the time may have been viewed as too much gambling expansion.

Now Reznik’s plan to decriminalize poker home games is back, and this time the odds don’t appear to be stacked against him. But there is one major difference between HB 127 and the original HB 486/59.

In the original bill, home games would be allowed to operate with a maximum of $2,000 combined between all players in a game. But the current proposal has a compromise, dropping the limit to $500.

Rules to Play By

HB 127 has some additional strict guidelines for home games. Players must compete against each other at the same location without the use of electronic devices, meaning the game can’t be played through an online poker site.

The person(s) hosting the game can participate in the game, but are not allowed to take any rake or profit in any way, other than from cashing in the game. Home games would be limited to no more than once per week, so players wouldn’t be able to set up a nightly game.

Passing out flyers and posting ads on Craigslist for your home game in Maryland won’t fly by state law. Should the above bill pass, only players with a “previous social relationship” may compete against each other in a home poker game.

To summarize, HB 127 would legalize poker home games in Maryland, as long as they are hosted no more than once a week, are played in a home, the hosts don’t take a rake, and everyone in the game knew each other before the game started.

How they are planning to enforce this new bill, should it pass, is anyone’s guess. Your doorbell rings, and it’s the Home Poker Game Police, maybe? Right.

Hopefully this is another step in the right direction for all you American players. But honestly, have any of these poker “laws” ever really prevented you from playing a home game? I highly doubt it.

What would we do without these politicians to tell us ADULTS what we can and can’t do with our OWN money, in our OWN homes with other private citizens on our OWN time?!?