Marvin Rettenmaier Talks to CardsChat About His SHRPO High Roller Win, Picking Your Spots, and Getting Lucky 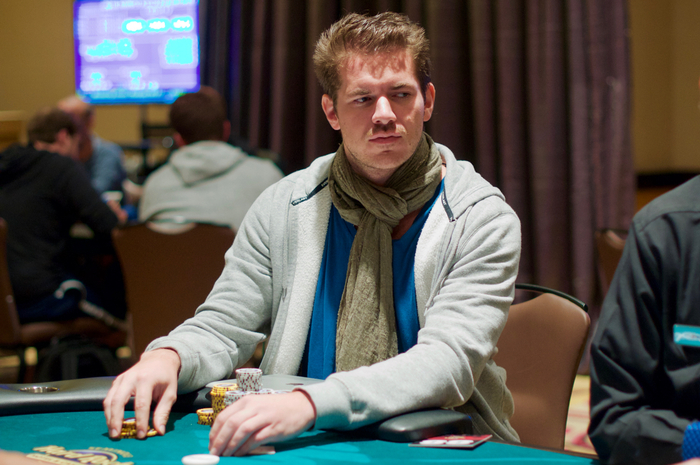 German poker pro Marvin Rettenmaier was happy to wait for the right spot to move in, knowing he was short-stacked at the final table of the SHRPO 2016 High Roller event. (Image: SHRPO)

Well, that all changed on Tuesday this week, when he topped a field of 105 entrants to win the Seminole Hard Rock Poker Open (SHRPO) $25,000 High Roller for a juicy $787,497. It was his second-largest cash ever, and confirmation that his “downswing” was indeed over.

“I ran incredibly well in 2011 and 2012,” Rettenmaier told CardsChat. “But then it was the complete opposite side of variance last year. It got really bad. It gets pretty depressing when you go all in and just think you’re going to lose. It’s very sad, but playing poker, you’ve just got to get over that, play the best you can, and get it in good.”

The German now splits his time between London, and the luxury resort town of Playa del Carmen on Mexico’s Yucatán Peninsula. And he certainly played well in the High Roller, which was live streamed across the world as part of the SHRPO’s American Poker Award-nominated The Big Four.

After 18 hours of play on Day One, which included an excruciatingly long lead up to the bubble, the remaining nine players returned to the final table rather short-stacked. Rettenmaier knew that there was bound to be action right away, so his plan was to sit back, watch, and wait.

“I played relatively passive in the beginning of the final table because there were some short stacks,” he said. “Other people were going quite wild. I started with 17 big blinds and the average was 23 BBs. The ante was one big blind. I was like six out of nine players.”

Rettenmaier sat patiently as Qartomy, the chip leader at the start, ran over the final table, though that changed when it got down to the last three players.

“The thing is Dan and Ray were even at one point, and I had like half [the amount of chips] as [they did]. Dan was controlling the pots, but Ray wasn’t. Dan wasn’t going to back down, so I thought there was a very good chance they would get in their 40 blinds at one point, so I was very passive and folded some hands I normally wouldn’t preflop. That’s when I got aces when he had kings.”

By that time, Qartomy had come back to Earth, and after the chips were counted down, it turned out that Rettenmaier had the bigger stack to eliminate the long-time chip leader.

Defeating One of the Best, Heads-Up

The Colman-Rettenmaier heads-up match proved to be a lengthy affair. Neither player wanted to chop, so they battled it out, like two gladiators of old in an arena. Colman played from behind most of the time, but he gave Rettenmaier plenty of competition. In the end, Colman got it all in with the best hand, but Rettenmaier flopped a diamond flush to clinch the title.

“Coming out on top in the end is very nice,” Rettenmaier told us. “I ran really well at the final table.” 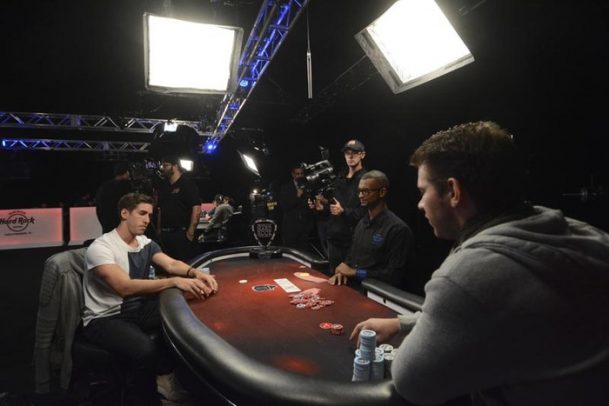 Interestingly, Rettenmaier was more than willing to speak to the media after the win, something the media-adverse Colman likely wouldn’t have done.

If you recall, Dan infamously refused to speak to the press after winning the $1 million Big One for One Drop in 2014, a year in which he won an unprecedented $22,389,481.

“I think it’s good for poker in general,” Rettenmaier says of embracing the spotlight. “I like poker interviews, media, and coverage. I’m happy to do these interviews.”

Amusingly, Rettenmaier was spotted in the green room during a break searching for flights. When pressed about it, he admitted he was looking for a flight home that evening. Mind you, this is when there were still five players remaining in the tournament.

“I thought there would be a 10 p.m. flight or something, because of the time zone difference and the flight is only 90 minutes [to Playa del Carmen], so I thought why not,” Rettenmaier said with a laugh. “I wanted to go out there tonight, but I guess I’m going to stick around here and go out with [tournament director] Matt Savage. 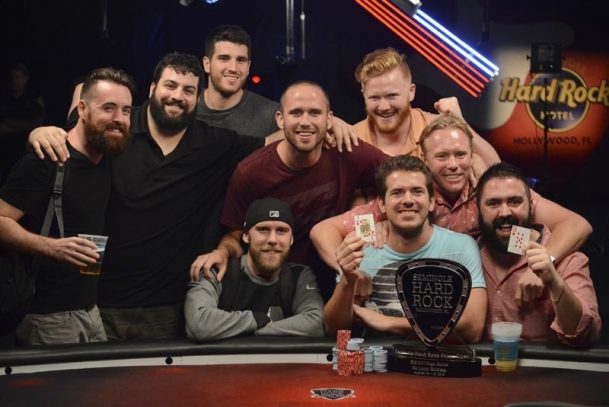 Since establishing itself as a major player in the tournament scene in 2013, the SHRPO has consistently attracted players from around the world. It’s impressive, considering it takes place less than a month after the annual World Series of Poker in Las Vegas.

“I think it’s a great property,” said Rettenmaier, when asked what keeps him coming back “The rooms are nice. I stayed here for the first time in a long time. I usually stay at Chance Kornuth’s place in Fort Lauderdale, but I didn’t decide until last week to come out and his extra room was occupied.

“The dealers are really good here. I don’t really see any mistakes, which is refreshing after the WSOP. There are a lot of good dealers out there and I understand it’s hard to bring that many top dealers together, but it was nice here when it was going really well and fast with no mistakes.”

One would think Rettenmaier would try to follow up his big win by trying for another, but that’s not the case.

“I don’t have any plans for this year for [live] poker,” the German pro, who is two weeks away from turning 30, told us. “Definitely no EPT Barcelona. I’m going to play some WCOOPs [online]. I might do Jacksonville. I’m going to stay in Playa until probably December, and then I’ll go back to Germany for Christmas to see my family and stay there for a month.”

“Gratuliere, Marvin.” Don’t ask us to pronounce that, but it means “congratulations” in the mother tongue.