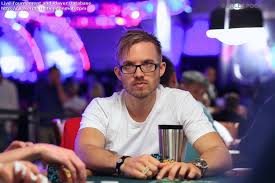 Martin Jacobson was not only named Swedish Poker Player of the Year, but also Poker Ambassador of the year. (Image: David Becker/Las Vegas Review-Journal)

Martin Jacobson won the 2014 World Series of Poker Main Event, making him the first Swedish player ever to accomplish the feat.

With the biggest win in tournament poker in his pocket, that made Jacobson the obvious choice for Swedish Player of the Year.

Jacobson earned that honor after receiving about 80 percent of the votes from readers on poker.se and pokerforum.nu, making him the overwhelming choice to win poker.se’s annual award.

It was the fifth time that Jacobson was nominated for the prize, but the talented poker pro had yet to secure the honor until this year.

Jacobson had a banner year in 2014, and while the WSOP Championship was certainly the highlight of his season, it wasn’t his only accomplishment.

Jacobson also cashed in two high-roller events at the Aussie Millions Poker Championship, and cashed a total of three times in the 2014 WSOP, including a 7th place finish in the $10,000 No Limit Hold’em Six Handed event.

In total, he won nearly $10.8 million on the year, though $10 million of that came from the WSOP Main Event victory. Jacobson was already a successful tournament pro before last year, though: he had over $4 million in career earnings heading into 2014.

This year, poker.se decided to add three new awards to go along with Player of the Year. Jacobson managed to snag another of these prizes, Poker Ambassador of the Year, winning about half of the votes from readers.

That too was a natural choice: Jacobson played well and showed excellent composure and sportsmanship during his WSOP run.

Other awards went to Mikael “punting-peddler” Thuritz, who won the Swedish Online Player or the Year award, and Robin Colbin, who won Breakthrough of the Year.

Thuritz is considered an elite mixed-game player, and reportedly won over $2.5 million in online cash games, most of which came from playing at high-stakes mixed game tables.

Meanwhile, Colbin had an excellent year in online tournament play, capturing more “Triple Crowns” (winning tournaments on three different sites in the same week) than any player in 2014.

For Jacobson, the awards were a pleasing way to celebrate the best year of his career.

“It is of course a great honor to be voted not only the Swedish Player of the Year but also first choice as Sweden’s Poker Ambassador,” Jacobson said to PokerNews. “My goal is to live up to the expectations by representing poker in the best way possible and hopefully encourage more people to become aware of this incredible game.”

Jacobson impressed viewers with a final table performance that included few mistakes, and even fewer that had the potential to be fatal to his chances. In an interview with CardPlayer a week after his victory, Jacobson credited the time he spent working with friends with improving his game tremendously.

“We ended up playing about 20 times, with my friends acting as close as possible to the actual players they were simulating,” Jacobson said. “That was a huge benefit to my game, those 500 or so hours of studying and practice.”

Those cheeky Swedes! Congrats to all of them, i hope i don’t see you at the tables anytime soon. lol.

sportsmanship during the WSOP ? that’s a surprise ! the blowhards get much of the TV exposure .