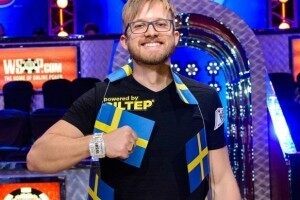 Martin Jacobson sporting his CILTEP badge, at the WSOP final table. The company produces natural performance-enhancers and made a film of his exploits in Vegas. (Image: Jayne Furman)

10 for 10, a documentary chronicling Martin Jacobson and his road to victory at the 2014 World Series of Poker, is to be released shortly, just in time for the start of the 2015 Series, and you can watch the trailer here.

Anyway, this particular documentary started out as a marketing concept for CILTEP Nootropic stack capsules. No, we had no idea what these were either.

Apparently they are a type of vitamin supplement, that work as a natural nootropic or “smart drug,” that combines artichoke extract and forskolin (yuk!) to “naturally induce long-term potentiation.” We think that means they make you smarter.

In short, pop some of these little performance-enhancers and you end up winning the entire World Series of Poker, just like Martin.

Jacobson was a huge fan of them prior to his victory, so much so that he agreed to act as a brand ambassador for CILTEP. CILTEP sent a camera crew along with him to follow his adventures, and the rest, as they say, is history.

The mild-mannered bespectacled former Swedish chef, who was nothing like the one we all grew up watching in The Muppet Show, charged through a field of 6,683 entrants to pick up a first prize of $10,000,000, defeating Felix Stephenson in the November finale.

“I’ve relied on CILTEP as my go-to product to optimize mental performance for the WSOP,” Jacobson claims on the CILTEP website. “I’ve noticed a remarkable difference in my ability to spend hours at a table without a break in concentration.”

OK, we’re sold, and we’re pretty much sold on the trailer, too, which looks very slick. We’re looking forward to watching the story, as it unfolds, of how a serial EPT finalist who had been so close to winning a major for so long, finally made it count.

The title of the film, 10 for 10, incidentally, refers to the chant coming from Jacobson’s supporters as his pocket tens connected with another ten on the flop, giving him the WSOP 2014 Main Event Champion title.

We’ll leave you with a quote from Jacobson when we spoke to him back in 2011 and we asked him about his dreams for the future.

“My ambition is just to do whatever makes me happy and right now I love what I do, and I hope that I can keep doing it for at least a couple of more years. With so much going on in the poker world and the variance involved in the game, who knows what the future brings?”

Now, if you’ll excuse us, we’re off to binge on artichoke extract and forskolin in preparation for this year’s WSOP, and to be honest we never even knew artichokes had forskolins.