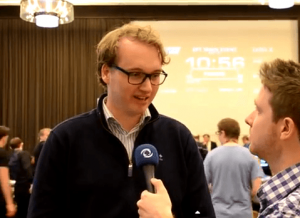 Martijn Ardon has become the first PokerStars Supernova Elite player of 2015, and he did it in record-breaking time.

Ardon, a 24-year-old Dutchman whose screenname is “Quadchrazs” on the site, took just 52 days to earn the required one million VPPs (VIP Player Points), averaging a staggering 1,000 €100 ($106) SnGs per day, mostly six-max hyper-turbos.

He beat the previous record, held by Ryan ‘MouldyOnions’ Bell, by one day. Before Bell, the record had been held by Andrew “azntracker” Li, who managed it in 59 days.

However, according to Ardon, he was actually a week off target, having been struck down halfway through by a mystery bug.

“I intended to reach it 15 February,” he told the PokerStars blog. “But I got stomach flu, so had to do some smaller VPP days at some point.”

Inspired by a desire to overcome his own lassitude, Arden imposed a strict regime in order to meet his goal.

“I was kind of lazy in 2014 and decided I wanted to work hard in 2015,” he said. “That kind of spiraled into three really big days at the start of the year. It then became apparent that I was first in the leader board and I wanted to keep it that way. I looked up the VPP record and decided to go for it, as I felt I was still playing fine.

“My standard day was getting up at between 12pm and 2pm and getting to sleep between 4am and 6am. I would usually do four three-hour sessions a day depending on the action. I played 6-Max hypers mostly, my game of choice for the last few years.”

Supernova Elite status is a huge badge of honor among online poker players, but it’s also financially rewarding, provided, of course, you don’t lose hundreds of thousands on your way there.

Now that he has emerged blinking into the sunlight, Ardon says he might just take it easy for a while after his grueling ordeal.

“I’m not sure what I’m going to play the rest of the year,” he said. “There will no doubt be a lot of 6-max hypers in there, but exploring other game types that are less stressful, like full ring games or heads-up is very good options as well. I will be taking some more free time off to begin with.

“It is a very good feeling if you set the bar really high and reach something hard to actually achieve, whatever it may be. For me, it was to get Supernova Elite as fast as possible while still playing on a good level. I’m very happy I finished it while I could.”

That it insane! Wondering if he made profit while grinding for supernova.

^^ That, a pretty important side of the equation.