The €1,100 Unibet Open Bucharest Main Event attracted 502 entries, and 37-year-old Marius Pertea, a general manager from Buzau, kept the title on his home turf by winning the tournament for €90,925 ($107,754). In the process, he became the third Romanian to win a Unibet Open Main Event title in 10 seasons. 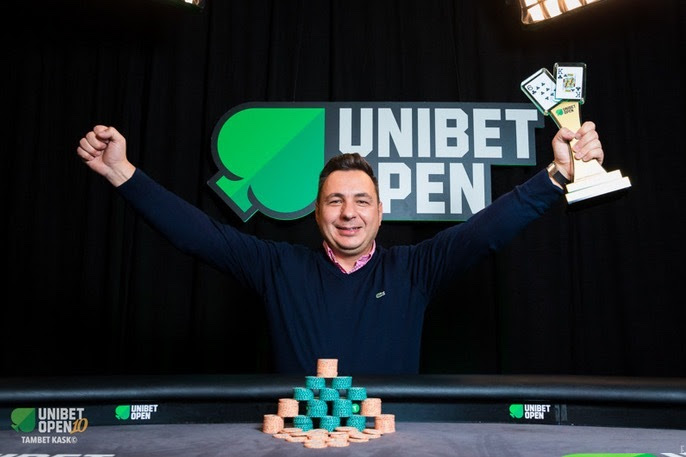 Marius Pertea follow in the footsteps of Traian Bostan by keeping the Unibet Open Bucharest title on home soil for the second year in a row. (Image: Tambet Kask/Unibet)

The main event, which generated a $594,914 prize pool, was held at the JW Marriott Bucharest Grand Hotel. It marked the tour’s final stop of 2017 and the end of Season 10. Of the tournament’s 502 runners, roughly 200 qualified online.

Prior to the Unibet Open Bucharest main event, Pertea had just over $134,000 in lifetime earnings, with a prior top score of $48,224 for finishing 11th in the 2017 PokerStars Championship Monte Carlo main event (won by Raffaele Sorrentino).

Pertea continued to slow-play, checking for a second time and then just calling when Vukovic bet 1.1 million. When the 9♣ completed the board on the river, Pertea checked for a third time and snap-called when Vukovic moved all in for 2.8 million. Vukovic took home €56,500/$66,957 for his runner-up finish.

Unibet was celebrating its 10-year anniversary of its Unibet Open tour, and players turned out in force for the latest five-day festival, which featured 11 tournaments and hosted a live stream each day with commentators Marc Convey, David Vanderheyden, and Matt Broughton.

Among the festival’s other winners were Romanian pro Carmen Zainescu, who won the €110 Ladies Event.

According to Unibet ambassador Daiva “Baltic Blonde” Byrne, “Carmen came in all serious, put on her sunglasses, and said, “‘I’m winning this event, I want the trophy’ and she did.”

Byrne declared the event a “huge success,” and applauded its international appeal. “We had girls from Malta, Romania, Israel, Netherlands, Norway and Germany as well as me from Lithuania,” she said.

Finally, Adrian Eugen Constantin won the first event of Unibet Open Bucharest by topping a field of 433 entries in the €150 buy-in Monsterstack. Constantin struck a three-way deal with runner-up Dumitru Adrian Pora and third-place finisher Alexandru Farcasanu with all three getting €8,094 ($9,547).