Argentina’s Maria Lampropulos has become one of the top-earning poker women in history after winning the partypoker LIVE Millions Main Event in Nottingham, UK on Sunday. Her million-pound ($1,255,004) win pushed her live tournament winnings to $1,606,426, with Sunday’s take down being her best cash ever, obviously. 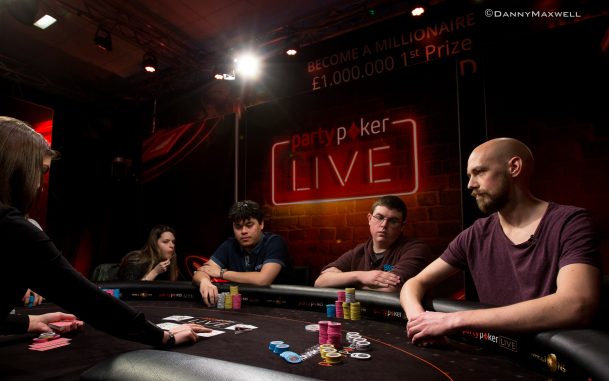 Maria Lampropulos (left) ran off with the latest partypoker LIVE event for an historic win, beating out CardsChat forum member Jeremy Pantin (next to her) in the process. (Image: Danny Maxwell/pokernews.com)

Going Down in History

The partypoker LIVE tournament series might only be a few weeks old, but already it’s making history at Britain’s Dusk Till Dawn (DTD) poker room.

Those that bought in online were able to join the action for $700, while those who wanted to skip the preliminary rounds and take a seat inside Nottingham’s DTD for Day 1 were required to pay the full $6,744. In the end, when the entries had all been counted and verified, the final prizepool exceeded the guarantee, setting up what would be a memorable final table for those involved.

When it came down to the final throes of the competition, it looked as though longtime CardsChat forum member Jeremy Pantin, aka ‘Marginal,’ would take down the top prize. After entering the final table in strong position, Pantin made steady progress and cruised into the top four.

With short stack Mateusz Rypulak looking to make a move, Pantin got a little help from the poker gods when an ace on the flop allowed his A7 to beat Rypulak’s pocket kings. That hand helped put Pantin back into the mix, while Rypulak found his way to the rail a short time later.

But the forum favorite’s luck ran out when he made a big move with KJ. Staring at a Q43A2, board, Pantin made a bold all-in on the river, which seemed to leave Lampropulos slightly concerned. Finally, after asking for a count, she called with A3 for two pair to take the pot and send Pantin to the rail.

Despite missing out on the top prize, the Englishman picked up his biggest tournament win to date. Not only that, but his over half-million dollar  haul for finishing in third is the largest live tournament win by a CardsChat member ever, according to the forum.

Speaking to CardsChat after the event, Pantin said that a few fortunate spots early in the event helped him put together a solid run.

“It was a hell of a week, was the chip leader after day 2 and was able to have a good run. Sure a win would have been nice but third place is a good result and I can’t complain too much,” explained Pantin.

As well as commenting on his own performance, Pantin congratulated partypoker and the tournament organizer, John Duthie, for putting on a well-run event.

While one of our own missed out on a memorable win, Argentina’s Lampropulos did gain a spot in poker history. After falling behind to Jacob Mulhern in the final stages of the tournament, Lampropulos rallied and eventually scooped the final pot, the title, and $1,277,482, when her pocket kings held on against Ah Qc.

As the confetti fell, Lampropulos not only stood as the latest partypoker LIVE champion, but as one of leading female tournament winners in history.

Get my congratulations Jeremy. Excellent work!